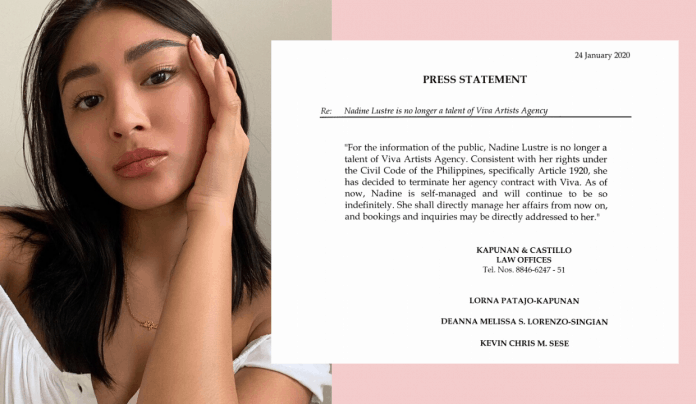 In a press statement by Kapunan & Castillo Law Offices, Nadine is no longer a talent of the artist management company that also handles the careers of Sarah Geronimo, Anne Curtis and Vice Ganda, among others.

The actress is now self-managed and her affairs such as booking and inquiries may be directly addressed to her, the statement further said.

“For the information of the public, Nadine Lustre is no longer a talent of Viva Artists Agency. Consistent with her rights under the Civil Code of the Philippines, specifically Article 1920, she has decided to terminate her agency contract with Viva,” the law office wrote.

“As of now, Nadine is self-managed and will continue to be so indefinitely. She shall directly manage her affairs from now on, and booking and inquiries may be directly addressed to her.”

Nadine is still a talent under Careless Music, her former boyfriend James Reid’s recording label. Prior to her departure from Viva, James left the agency last September to focus on his music.

The Kapunan & Castillo Law Offices was also the same law firm James tapped when he released a media statement last October 2019 about his decision not to renew his ties with Viva.

Built up by Viva Entertainment as an actress and performer, Nadine first appeared on TV5’s youth-oriented program Bagets and other GMA shows, and was an original member of Pop Girls, an all-female group introduced by Viva in 2009.

Her hit loveteam with James, which was launched via Viva Films’ Diary ng Panget in 2014, would eventually find its way to the Kapamilya network that same year. Their last project together was the film Never Not Love You in 2018, followed by Nadine’s two solo film projects produced by Viva, Ulan and Indak in 2019.

The actress, who sits as a judge on ABS-CBN’s reality-talent show Your Moment, signed a two-year guaranteed contract with the Kapamilya network last April 2019.