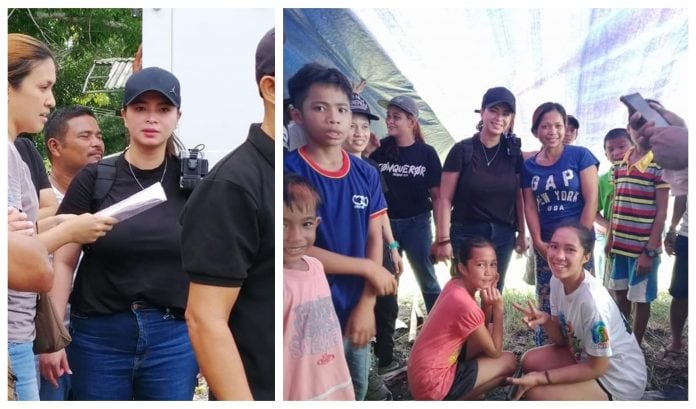 Angel Locsin shared today a glimpse of her visit to quake-affected areas in Mindanao on November 1 and 2 on social media.

Her Instagram or Twitter carried no posts during the duration of her visit wherein she was joined by fiancé Neil Arce. However, videos and photos of Angel from netizens surfaced and spread on social media.

These included pictures and videos uploaded November 2 by local resident Flora Mae Montes Basiliote that showed Angel checking on the conditions of evacuees in each of the temporary shelter set up in Barangay Batasan in Makilala.

Today, November 3, the actress took to Twitter to thank those who helped make her relief efforts possible.

With the hashtags #GivingCreditWhereTheCreditIsDue and #HelpMindanao, Angel’s post read: “No politics here. Just respect and gratitude to Cong. Paolo Duterte and Sir Bryan Lim for lending the truck with manpower, on a holiday, for the cause WITHOUT ASKING FOR ANYTHING IN RETURN.”

On Instagram, on the other hand, the TV and movie star shared the sorry state quake victims — particularly those in Makilala town — are in.

In a video interview by Angel, Pastor Joel Pang-ot of Barangay Batasan narrated that the two consecutive, powerful earthquakes that shook Central Mindanao and Davao Region this week, left them homeless and traumatized.

But what was supposed to be their refuge caved in as another earthquake struck on October 31, killing the village chief Bangot and injuring others.

Without homes to return to, evacuees are forced to live in makeshift tents.

He also appealed for help and attention from President Duterte and Mindanaoan senators Bong Go and Manny Pacquiao.

Despite the tragic situation, Pastor Joel said the survivors are keeping the faith.

According to Philippine Star, quake victims are desperately in need of food, water and medicines.

Concerned government agencies have reportedly been mobilized to address these needs, however, good samaritans wanting to help are welcome and advised to coordinate with local government units, the report added.

Humanitarian organizations such as the Philippine Red Cross have also dispatched help to the affected areas.

Citing numbers from the National Disaster Risk Reduction and Management Council (NDRRMC), Star also reported that the death toll in the two quakes has climbed to 21. The magnitude 6.6 quake on October 29 claimed nine lives out of the 18 deaths in Central Mindanao. Others perished from the magnitude 6.5 quake that took place only two days after.

Based on yesterday night’s NDRRMC figures, quake-affected families have totaled to 29,479 families or 147,395 persons.