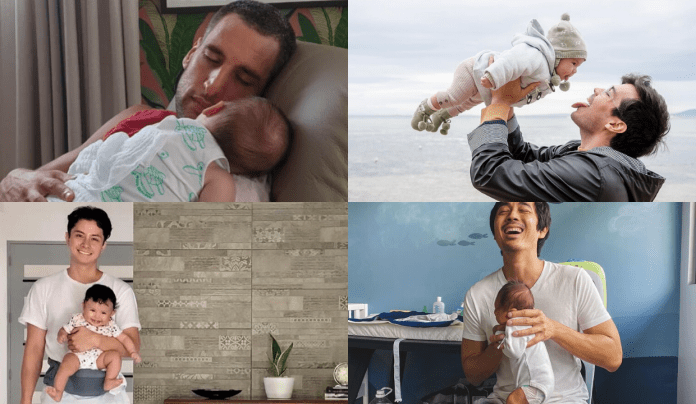 These newbie celebrity dads spent their first Father’s Day with their bundles of joy at arm’s length!

French-Filipino digital creator is enjoying his time as a father to his first child with wife Anne Curtis. Their daughter, Dahlia Amelie, was born on March 2 in Melbourne, Australia.

Anne took to Instagram to greet the first-time dad on his special day.

“You are such an amazing father to our Dahlia Amelie. From early morning smiles, nappy changes, burping sessions, cheeky monster faces and sarap cuddles — being a father has come so naturally to you,” she said.

The actress-TV host also conceded that their “little girl is a little Erwanita.”

“She looks so much like her papa,” Anne said. “I guess lihi is real after all.”

Our next newbie dad, Nico Bolzico, humored the couple and offered “experienced dad” advice should his brother-in-law need it.

“Happy Fathers Day Erwano! If you need advice from a more experienced dad, I am here for you!”

The Argentinian businessman and full-time joker Nico Bolzico became a first-time daddy on January 1 when he and wife Solenn Heussaff welcomed their baby girl Thylane Katana.

Nico was brought to tears after his wife created a 10-minute video of his life leading up to his days with their first child.

“No matter how strong you are for me, I know how soft your heart can be. I hope enjoyed this 10 min recap shows how you are and that we are thankful to have you. Happy 1st Father’s day my love,” Solenn wrote.

Early this year, actor JC Santos surprised his fans when he revealed that he is already a married man and a soon-to-be dad. In March, he shared his baby girl’s first photo on Instagram.

On Instagram, he shared more snaps with his daughter to commemorate his first Dad’s day.

“Today is my day, apparently,” he wrote.

Kryz announced that she’s expecting their first child back in December with a 15-minute vlog on YouTube.

“I feel excited. I feel nervous and I feel very motivated to improve as a person because we’re also gonna be raising a person,” Slater, who runs his own construction business in Cebu, said.

On Instagram, his wife greeted him on his first Papa’s day.

“Happy first Papa’s day, my love. Thank you for being the absolute best,” she said.

Anne Curtis hopes to take baby Dahlia to a music...

Erwan Heussaff shares thoughts after getting fully vaccinated with Sinovac

Solenn Heussaff says daughter Thylane is her ‘best present for...