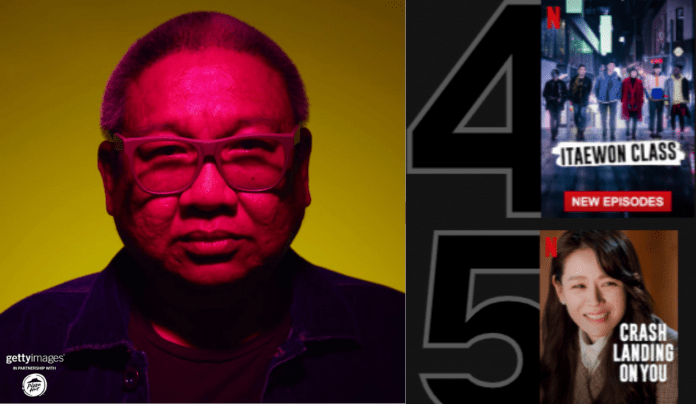 Filipino filmmaker Erik Matti pointed at K-dramas as the reason why the local entertainment industry will be doomed in the future.

Matti made the statement on Tuesday, upon noticing that Korean content is dominating the streaming giant service Netflix’s daily Top 10 most-watched list in the country.

“The daily Top Ten most viewed on #Netflix shows us how our movies and tv are doomed in the future. K-drama galore,” he tweeted.

He further took a swipe at K-dramas, calling them “faux cinderella stories with belofied actors whiter than white.”

“And it’s all about love in the midst of this pandemic,” he also lamented.

As of Saturday, April 18, five K-dramas are included in today’s Top 10 most-watched Netflix, namely, Hi Bye, Mama!, Itaewon Class, Crash Landing On You, Fright For My Way and What’s Wrong With Secretary Kim.

Para sa Broken Hearted starring Yassi Pressman, Sam Concepcion, Marco Gumabao, Louise delos Reyes and Shy Carlos is the only local film that made it to the list.

Matti’s remarks mostly didn’t sit well with K-drama fans. Some even suggested that the film director should try watching Korean shows to understand why these are patronized by Filipinos.