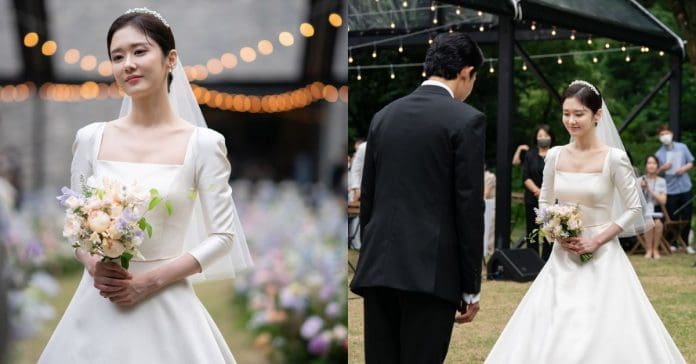 South Korean actress Jang Nara and her non-showbiz boyfriend have officially tied the knot after announcing their plan to wed earlier this month.

The 41-year-old actress on Sunday held her private wedding ceremony at the Bonnelli Garden in Seoul, with only her family members and closest friends invited.

Her co-stars CNBlue’s Jung Yong Hwa (Sell Your Haunted House) and Lee Sang Yoon (VIP), were also among those present at the ceremony.

“While filming Sell Your Haunted House, I promised [Jang Nara] to sing at her wedding if she gets married. Today, I’ve kept that promise,” Yong Hwa said.

Kyung Rim and Soo Young also sang a celebratory song for the couple.

According to a Soompi report, after Jang Nara wrapped up her wedding, the actress thanked everyone for congratulating her.

“Thank you so much for congratulating me with your interest and love. To repay your love and support, I will live happily and merrily as a great wife at home and a sincere actress at work,” she said.

The Soompi report also contained wedding photos of Jang Nara, which were shared by her agency, Lawon Munhwa Agency.