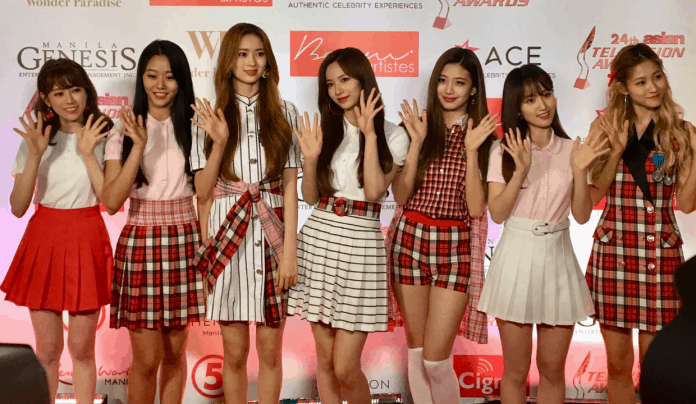 Cherry Bullet is a Korean girl group from FNC Entertainment. This year-old team is made up of seven charming girls — Kim Bora, Park Chaerin, Hirokawa May, Heo Jiwon, Choi Yuju, Park Haeyoon and Katsuno Remi — who will steal your heart.

We had the pleasure to meet the girls of Cherry Bullet after their charismatic performance at the 24th Asian Television Awards at Resorts World Manila recently. The girls sang their hit songs Really Really and Q&A.

“I’m the main singer of Cherry Bullet,” she told the press.

“I am Chaerin, the main dancer of Cherry Bullet.”

“Maknae” is a Korean term used to refer to the youngest person in a group.

Jiwon said she’s the energy source of the group.

Yugu is referring to how fans have likened her “cuteness” to a pet cat or dog.

After their brief introductions, the girls shared that they were excited to be a part of the Asian television industry’s most prestigious night.

“We were really excited to be a part of the big awarding (event) that is happening here in the Philippines,” Jiwon said.

Bora added that it was an honor to be performing with great artists around different Asian countries.

“I think we showed a lot through our charms,” she said.

The group debuted last January 21, 2019. Despite being a year-old in the K-Pop scene, the girls have already acquired a fan base in the Philippines.

“It was our first time to meet our Filipino fans and we got so touched they were cheering and all so we would like to prepare and be better for us to meet our fans more often,” Remi said.

When asked if they would want to appear in any TV series like Nancy McDonie from K-Pop girl group Momoland who will be starring in an ABS-CBN teleserye with actor James Reid, Haeyoon said they are very interested in showing who they are.

“We are very interested and we wanna show our different charms to different mediums,” she added.

For this year, the girls of Cherry Bullet are planning to have a lot of activities in Korea and abroad.

“We would like to show more of Cherry Bullet through the two more albums,” May excitedly shared

Chaerin added: “We’re also coming up with a new program, so stay tuned for it!”

Want more of Cherry Bullet? Here are the music videos of Really Really and Q&A: