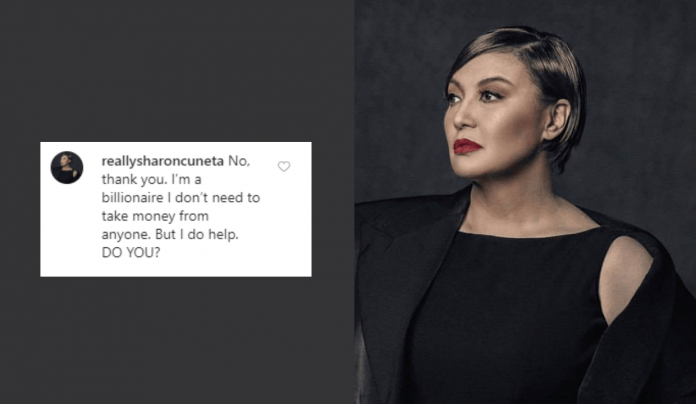 Megastar Sharon Cuneta lectured a netizen who accused her of pocketing the P2 million cash donations she raised during an online concert.

Last May 10, Sharon held a Mother’s Day special virtual show dubbed Love Sharon and Music to raise funds for the benefit of frontliners and Filipinos in need amid the COVID-19 crisis.

The singer-actress on Tuesday shared on Instagram the breakdown of the donations received from the said concert.

One comment, however, irked Sharon as it asked her if she would be keeping the donations in her own bank account.

To which Sharon replied, “No, thank you. I’m a billionaire I don’t need to take money from anyone. But I do help. DO YOU?”

Sharon also corrected a fan who said she was a millionaire, but rather a “billionaire since my thirties”.

The megastar also expressed dismay over netizens putting malice on their gestures.

Addressing “judgemental” people, she revealed that the donations she made have now amounted to P5 million already.

Sharon Cuneta opens up on loneliness after husband Kiko Pangilinan...