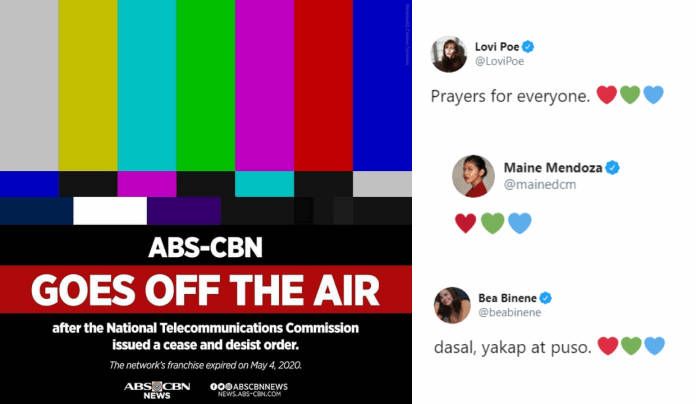 In compliance with the National Telecommunications Commission’s (NTC) order to cease and desist, broadcasting network ABS-CBN officially signed off on Tuesday night.

The NTC ordered the network to stop its TV and radio broadcast operations a day after their 25-year license to operate expired last May 4.

In a statement released the same night ABS-CBN went off air, the media giant said they trust the government will decide with the best interest of the Filipino people in mind. (READ: ABS-CBN issues statement on NTC’s cease and desist order)

Kapamilya celebrities were not the only ones who grieved as the network went off air, Kapuso celebrities, from the rival network GMA 7, sent their support with red, green and blue hearts representing the network’s colors.

“The moment we no longer have a free press, anything can happen. What makes it possible for a totalitarian or any other dictatorship to rule is that people are not informed; how can you have an opinion if you are not informed? If everybody always lies to you, the consequence is not that you believe the lies, but rather that nobody believes anything any longer.”

Actress Maine Mendoza was one of GMA’s artists who showed her support simply with red, green and blue hearts.

Lovi Poe also showed her solidarity with the three hearts.

“This is heartbreaking,” she tweeted.

Julie Anne San Jose and Bea Binene both sent out “dasal, yakap at puso” along with the three hearts representing ABS-CBN.

Now Kapuso actor John Estrada said he prays that the network’s franchise will be renewed soon.

Aiko Melendez said that despite being a Kapuso, she is in solidarity with the Kapamilya network.

LOOK: Gabbi Garcia and Khalil Ramos have the dreamiest snaps...