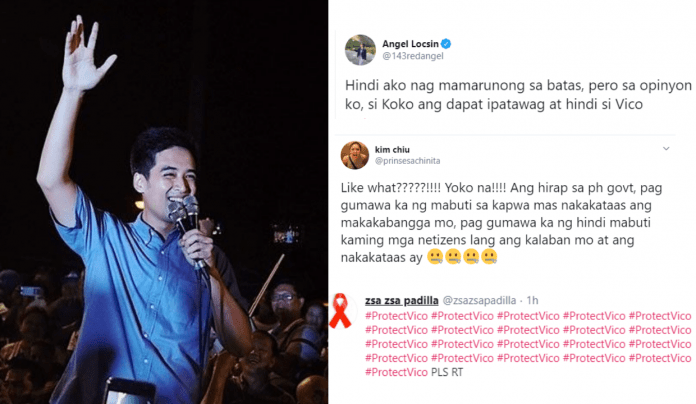 Several celebrities rallied behind Pasig City Mayor Vico Sotto after he was asked by the National Bureau of Investigation (NBI) to explain his side on a possible violation of the Bayanihan to Heal as One Act.

#ProtectVico quickly landed the top spot on Twitter trends nationwide and worldwide Wednesday night after netizens took to the social media platform to express their support for the 30-year-old local chief executive.

According to the NBI graft division, Sotto “will be given an opportunity to explain his side why he should not be charged for violating the Bayanihan Act when he reportedly allowed tricycle drivers to operate despite a transportation ban during the quarantine.”

Aside from asking for a written explanation from Sotto, the NBI letter signed by Vicente De Guzman III, deputy director for investigation services, also asked for a representative of Sotto to come to its Office of the Anti-Graft Division on April 7 at 10 a.m.

Senate President Tito Sotto, who happens to be young mayor’s uncle, took to Twitter to defend his nephew.

Meanwhile, several celebrities also trooped to Twitter and aired their sentiments on the issue.

Vico Sotto drops by set of dad’s sitcom in Pasig...