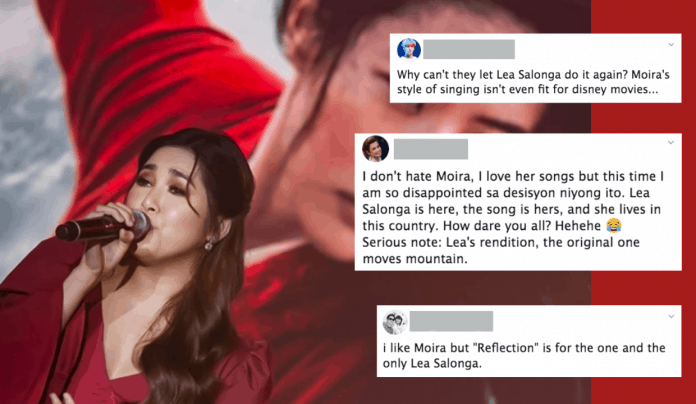 ‘Why not Lea Salonga?’: Netizens react to Moira Dela Torre as singer for Phl version of Mulan theme song

“Moira Dela Torre, a warrior in her own right and a true voice of her generation, has been chosen to sing her unique take on the beloved song ‘Reflection’ from Disney’s Mulan,” Walt Disney Studios said.

The iconic Reflection was originally sung by broadway legend, our very own Lea Salonga in 1998.

Following the announcement, some netizens were puzzled as to why Moira was chosen for the song instead of its original singer.

Lea took the 15th spot on the top trending list for the country.

A fan of Lea’s expressed their disappointment over the decision as she emphasized Reflection is her idol’s signature song.

“I don’t hate Moira, I love her songs but this time I am so disappointed sa desisyon niyong ito. Lea Salonga is here, the song is hers, and she lives in this country. How dare you all? Hehehe. Serious note: Lea’s rendition, the original one moves mountain,” they wrote.

Another asked why it was necessary to tap a different artist when the “legend” is already here.

“But as far as I know the Legend is here living at the Philippines.. Bakit kailangan pang kumuha ng iba for the records.. I Love Moira.. But I think Lea Salonga is more suitable to sing that song,” he said.

A netizen stressed that the iconic song belongs to the multi-awarded theater actress.

“I like Moira but Reflection is for the one and only Lea Salonga,” they said.

“Why can’t they let Lea Salonga do it again? Moira’s style of singing isn’t even fit for disney movies,” a netizen said.

Another commended Moira for her talent but insisted her style is “pang hugot.”

Others were on Moira’s side and asked that those doubting the singer’s capabilities should “let her have her turn.”

“Btw, Lea Salonga’s voice is so flawless you could just listen to her original recording of Reflection today. Let Moira have her turn ffs. Don’t condemn her for getting a great opportunity any singer would love to have. That’s coming from someone who’s a Lea Salonga diehard fan.”

“Let’s just support both of them. Isn’t that hard to do?”

“Pero let’s give Moira the chance to sing it too,” a netizen asked.