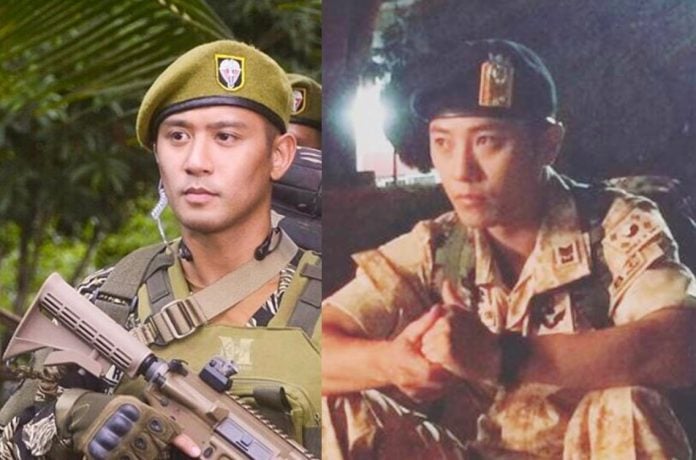 Fans of the Philippine adaptation of the hit Korean drama Descendants of the Sun think that Rocco Nacino totally looks like Jin Goo, the actor who originated the role he’s playing in the GMA series.

“Ang galing! Magkamukha nga!” he wrote on Twitter, while sharing fan-made memes showing both his and the Korean star’s photos.

In the series, Rocco is Technical Sergeant Diego Ramos a.k.a. Wolf, a Special Forces soldier.

The Kapuso actor was previously asked during an interview if he was cast in the Philippine remake because he’s a dead ringer for the 39-year-old Korean actor. (Apart from Descendants, Jin Goo is also known for his award-winning performance in Mother, an earlier film of Oscar-winning Parasite director Bong Joon Ho).

Rocco revealed he was getting comments about the resemblance even before GMA bought the rights to adapt the series for Philippine TV in 2018.

The resemblance is uncanny, but Rocco promises he will give a fresh interpretation of his character.

“It’s a real honor to be part of (Descendants of the Sun). We’re giving what the fans want. So, it’s a plus for me. Pressure din sa akin. Baka kasi may ine-expect sila na certain portrayal, or gusto nila ganun-ganun din yung pag arte ko. Of course not, I’m going to give it my own flavor.”