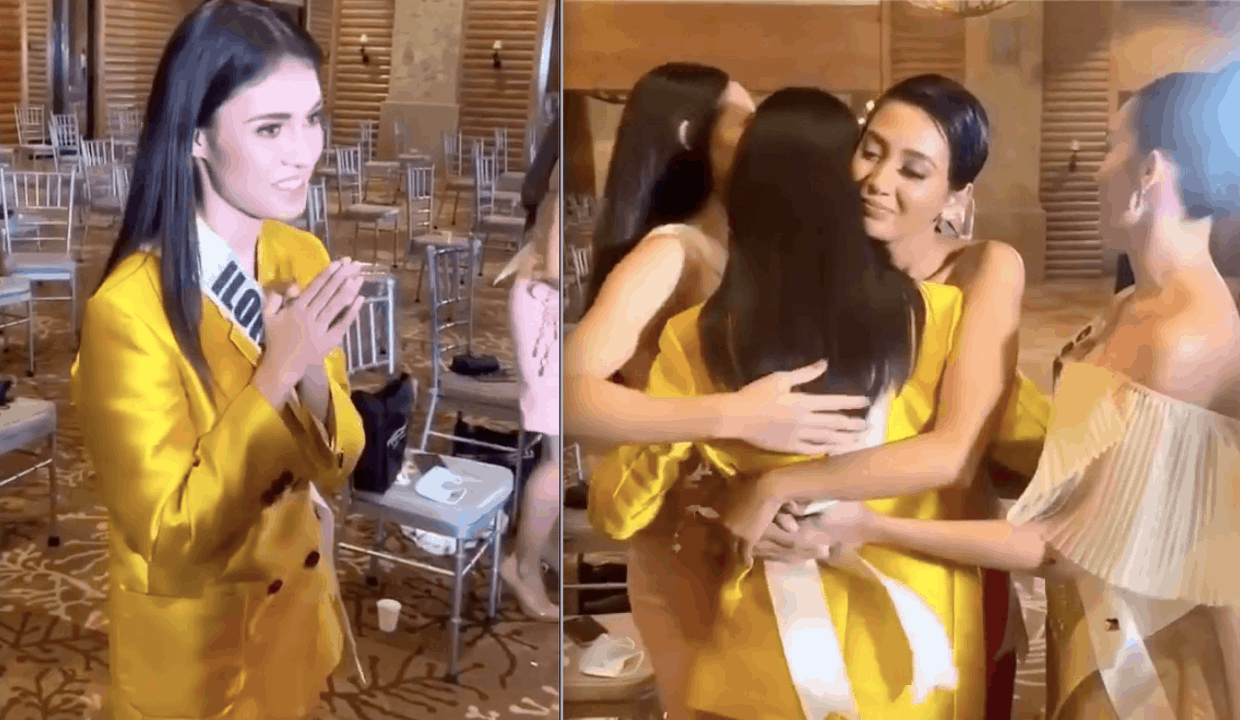 A day after Rabiya Mateo was crowned Miss Universe Philippines 2020 during the pageant’s pre-taped grand finale held in Baguio City, a never-before-seen video of the exact moment the Ilongga beauty found out she won has been released online.

Second runner-up Michele Gumabao was nowhere to be found when the girls congratulated Mateo for her win on Sunday.

But the Quezon City bet and former volleyball star has since explained her absence after a photo showing Mateo with the rest of the finalists except her spread online shortly after the pageant’s telecast.

She confirmed in a statement thanking her supporters that she didn’t get to finish the viewing party.

“I left this morning sa BCC (Baguio Country Club) while the pageant was ongoing. I knew who won last night pa. I tried to go to our viewing party but everyone kept asking what happened all the hugs all the looks I couldn’t handle that,” Gumabao said in a statement shared by her training camp Aces & Queens.

“I can handle defeat hahahaha (but) I can’t handle the people asking me why why why…I’m sharing this with you because you deserve to know my side, we don’t need to defend to anyone. I did my very best and I have no regrets,” she added.

Though the grand finale was taped as live, Mateo said in an ABS-CBN interview that she only knew she was the winner during the viewing party on Sunday.

A day before the pageant, allegedly leaked “coronation” photos circulated on social media. Host KC Montero said in a now-deleted tweet that the pageant organizers shot “five different endings” with various candidates for the grand finale, explaining that they had to film the show in advance because of the pandemic situation.

“That’s true (I only learned on the day of the telecast). So yung ibang tao, they already knew I was the winner but I was still watching. I think nasa production number palang ako, then almost pa swimwear na nung nag-message yung kaibigan ko ng ‘You won, kakapanood ko lang sa Empire.ph,'” said Mateo in the ABS-CBN interview.

The former Miss Universe Philippines wrote on her Instagram stories that a true queen bears defeat with dignity, accepts criticism with poise and receives honors with humility.

MJ tweeted: “BBP2012 taught me my greatest pageant lesson in life. A true queen is someone who can accept defeat and rise above it. A crown doesn’t define us, we define it. This is not the end but only the beginning for our #MissUniversePhilippines girls. Congratulations everyone.”

Though it is not clear to whom the messages were addressed, Taguig’s Sandra Lemonon spilled “tea” on social media and posted cryptic messages about how real queens play fair.

Early Monday, the board director of the MUP Organization Albert Andrada released a statement, saying that they are standing by Mateo as the first winner of the pageant under the new leadership. It was previously run by Binibining Pilipinas Charities, Inc.

“As of this time, we are standing by Rabiya Mateo as the first winner of Miss Universe Philippines. We are also grateful to our sponsors, stakeholders and supporters who sustained us throughout the holding of the first edition of Miss U PH franchise amid the limitation of the pandemic,” he wrote.