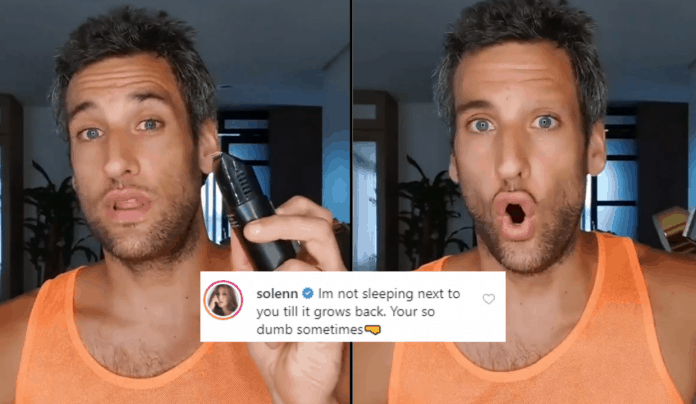 LOOK: Nico Bolzico shaves off one eyebrow by mistake

Nico Bolzico became a victim of his own prank, which was supposedly for wife Solenn Heussaff, when he accidentally shaved off one of his eyebrows.

Holding an electric shaver, the Argentinian businessman explained to the camera how he was going to play a trick on Solenn.

“So, basically I got this (electric shaver). When I turn it on this is the sound that it makes,” said Nico in a video posted on his Instagram on Thursday.

He continued, “And what will happen is, I’m gonna pretend that I’m shaving my eyebrow. But I’m gonna have the same sound on my phone. So it will be like that.”

Nico later tried demonstrating the prank but got surprised himself when he shaved his left eyebrow for real.

In the video’s caption, Nico warned, “THIS IS NOT A CHALLENGE. DO NOT DO THIS.”

Solenn, on the other hand, told her husband, “I’m not sleeping next to you till it grows back. Your so dumb sometimes?.”

Followers of Nico had a laugh over the “accident” but at the same time felt bad over his eyebrow loss.

Nico shared some of the netizens’ reactions in Instagram stories.

In an Instagram post on May 17, Nico revealed that he still has two eyebrows, proving that he can be one of the best prankster!