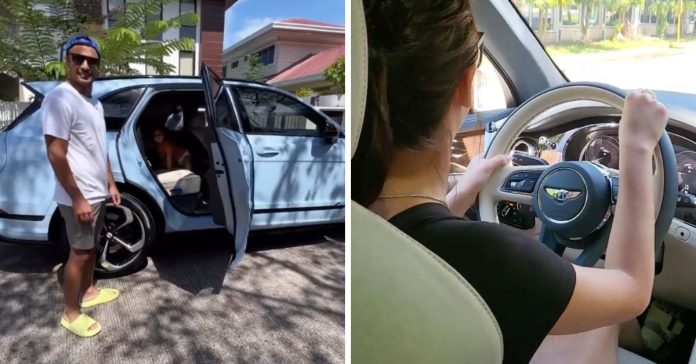 Two months before their first wedding anniversary, an excited Derek Ramsay has already gifted his wife Ellen Adarna with a new luxury car to mark the milestone.

The actor took to social media to share the moment when his wife’s blue Bentley car was delivered to their home.

Netizens had been guessing that the car is a Bentley Bentayga, which according to Topgear Philippines has a price tag of P12.2 million.

“Advance happy anniversary to the love of my life. Thank you for giving me so much love. I’ve really found true happiness. I love you so much!!!! So so much!!!” he wrote in the caption.

In the video, Ellen can be heard joking with her husband as she said: “But, I don’t drive.”

Under the post, the celebrity mom teased how Derek would be the one to enjoy driving her car.

“I like it but you know my love language is physical touch and quality time soooo your hugs and kisses are myyyy number 1. I love youuuuu. I know ull enjoy driving my car,” she said.

It was in November of last year when the star couple tied the knot with an intimate wedding ceremony at a luxury resort in Bataan.