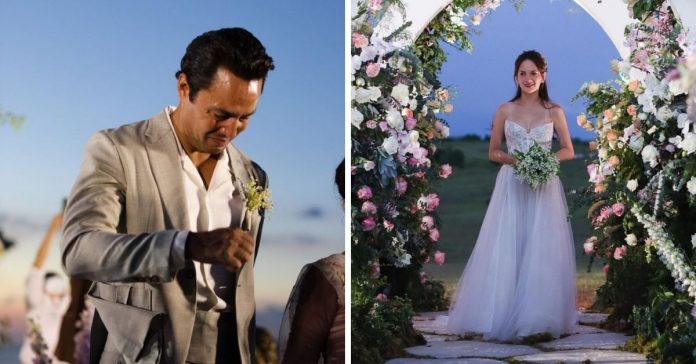 Ellen Adarna and Derek Ramsay have finally tied the knot eight months after their engagement.

The celebrity couple exchanged I do’s in an intimate wedding ceremony at a luxury villas and resort in Bataan on Thursday, as seen on stories shared by events specialist La Belle Fete and photographer Team Pat Dy on Instagram.

Ellen looked simply elegant in a Marc Rancy gown while Derek wore a suit by Bianca Cordero, matched with a pair of leather shoes which had his and Ellen’s names etched on them.

In a series of Instagram stories of Cebuano furniture designer Vito Selma, Ellen was driven to the venue in a golf cart, while Derek was already getting emotional even before the arrival of the bride.

Elias, Ellen’s son with ex-partner John Lloyd Cruz, was one of the ringbearers, while Scarlet Snow Belo and Beauty Gonzales’ daughter Olivia served as flower girls.

Ellen and Derek, who went from being “neighbors to lovers,” first sparked romance rumors after they were spotted getting cozy at a dinner party at the latter’s house early January this year.

The lovebirds confirmed being in a relationship in February and got engaged late March.