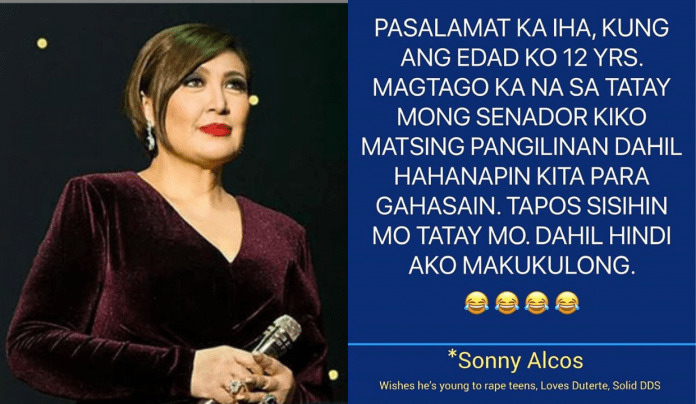 Sharon on Saturday shared a quote card of a certain Sonny Alcos from the satirical page ddsconfessions wherein he allegedly said that if he were a minor, he would rape Frankie and get away with it because of Sen. Francis Pangilinan’s Juvenile Justice Law.

Sharon went on to hit back at Alcos, who claimed to be a Duterte supporter.

Sharon took a moment to apologize to her fans for the foul words since she couldn’t hold her anger in because the man “crossed the line” and she would not let it pass.

Sharon also shared that they are now verifying leads after the netizen allegedly removed all of his social media accounts.

“I WILL PERSONALLY MAKE SURE THIS KABABUYAN YOU HAVE POSTED TO DISRESPECT MY DAUGHTER IN THIS DESPICABLE, MALICIOUS AND INSIDIOUS WAY WILL BE OF GREAT INTEREST TO THEM,” she said.

Sharon even tagged Davao City Mayor Sara Duterte as well as Tourism Secretary Berna Romulo-Puyat in her post. The Megastar is known to be good friends with the presidential daughter even if her husband, Sen. Kiko, is aligned with the opposition.

She also noted that she already forwarded her concern to Department of Justice Secretary Menardo Guevarra “who has been my friend and lawyer since 1992.”

Sharon warned the netizen that she will go after him.

Frankie recently made headlines after voicing out her views on the rape culture online.

In a tweet, Frankie left three middle finger emojis in reaction to the the quote card she shared on Twitter.