Why did Kim Chiu cry during Wish Bus performance of Bawal Lumabas? 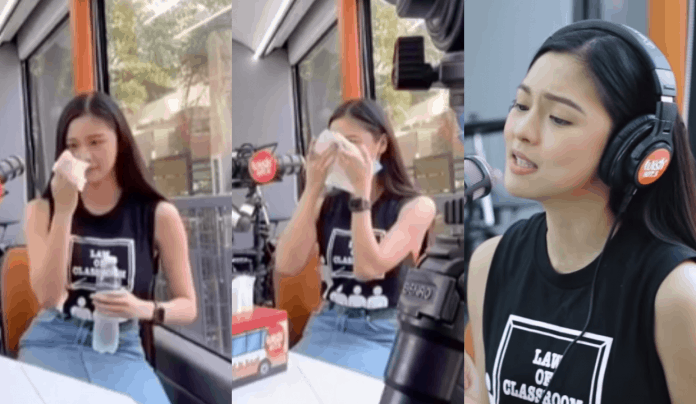 Kim Chiu’s older sister Lakam shared a behind-the-scenes video of the singer-actress’ now-viral Bawal Lumabas performance on the Wish 107.5 Bus, as she lauded her for bravely facing the “people who will put her down again.”

In the video shared on Lakam’s Instagram, Kim can be seen getting emotional, taking a break at some part of the recording to wipe tears, while hitting the notes of her accidental hit “classroom song”.

“She is so brave! Sang the song inside the Wish Bus, face the people who will put her down again once the video will be out, and sang the song live for the first time, which took her hours long to record because of the lyrics that hit her when she sings it,” she added.

Lakam took pride in how her sister was able to stand up from all the negativity thrown at her, calling her a superwoman.

“All I can say is… my sister is a superwoman. Throw stones at her; she will throw back kindness. May mga gusto na akong sagutin pero sinasabi niya ‘wag na, hayaan na natin sila.’ I know she is holding on to her faith kaya siya ganyan ka tibay!”

The video, however, once again received flak and mixed reactions from the online community, currently having half a million dislikes on the platform.

But despite continuously receiving criticism, Kim has chosen to stay positive and even thanked her “classmates” for supporting the video with over six million views as of writing.