Kris Aquino hits back at netizen over ‘family of thieves’ comment 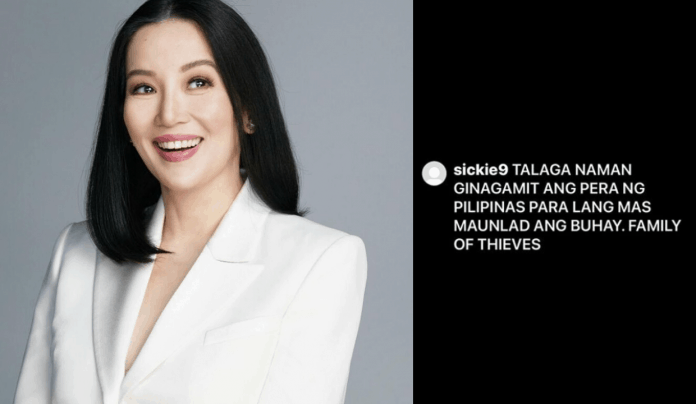 Kris Aquino clapped back at a netizen who said her family was a “family of thieves” using the nation’s money to fund her lifestyle.

In an Instagram post on Thursday, the actress-host posted a video of her swimming as part of her wellness journey. She was with her son Josh.

Aquino then responded, “I cannot argue with your logic.”

She said “hard work pays off” and God rewards those who are “cheerful givers” and “knows how to say thank you!”

Kris also detailed that she has receipts from the Bureau of Internal Revenue (BIR) to back her claims.

Kris reiterated that she only used the money of Filipino people “who helped make my childhood dreams come true,” adding that through the years, she has been sharing her wealth and blessings “to help better the lives of others.”

“Kung mag enumerate naman ako ng lahat ng natulungan ko through the years, EPAL naman ako ang next na paratang — so it is more than enough the beneficiaries know and my Creator knows that i shared the blessings i received to help better the lives of others,” she said.