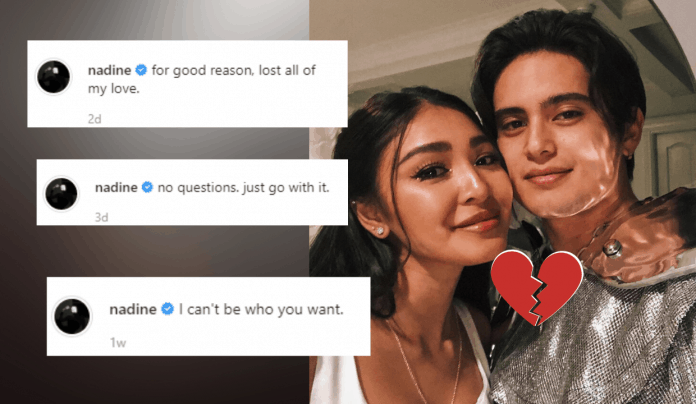 JaDine became the No. 1 trending topic on Twitter after reports about James Reid and Nadine Lustre’s breakup broke out Wednesday evening.

A Pep.ph report said that the 26-year-old actress had already left James’ home. The couple were known to be living together.

While they have yet to confirm or deny whether they have split up, some fans are suspecting Nadine’s recent captions on her Instagram might be hinting at the alleged breakup.

In a photo uploaded a week ago, Nadine wrote: “I can’t be who you want.”

While another Instagram post read: “no questions. just go with it.” Though James was tagged in the group photo by the beach, James’ younger sister Lauren left a comment: “But I have so many questions!” along with a crying and broken heart emojis.

In the most recent photo uploaded on her Instagram, Nadine said: “for good reason, lost all of my love.”

Others also pointed out that it’s been a long time since the couple uploaded photos of them together in their respective Instagram accounts.

The last photo of them together was when they were celebrating Halloween, which also happens to be Nadine’s birthday.

But it seems like the two are just keeping things private.

In an Instagram story last December 25, Nadine also uploaded a video of James goofing around while eating (which means they spent Christmas together).

Other netizens also said that the two were just together last night as they hosted a New Year’s Eve party in Rockwell.

Some fans even shared photos of the couple spending the holiday season with their family and relatives.

In a tweet by ABS-CBN showbiz reporter MJ Felipe last night, James shared that “their group is having a celebration to welcome the new year together with his girlfriend Nadine Lustre, somewhere in Rockwell, Makati.”

Meanwhile, Nadine posted a series of Instagram stories Wednesday evening from how she spent New Year’s Eve, although no James in it.

This alleged breakup better not be true because JaDines don’t want to start the year with broken hearts, right?