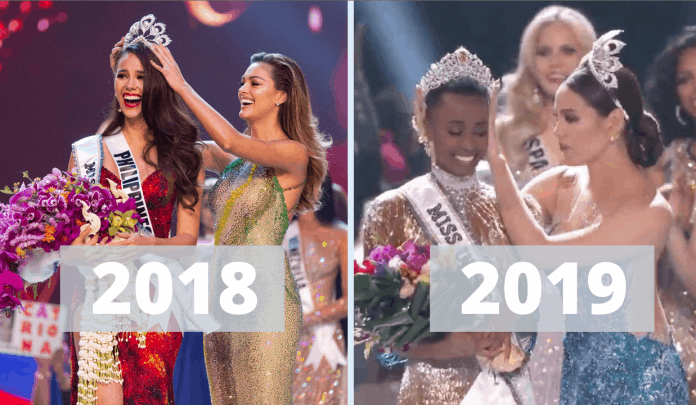 Her predecessor Miss Universe 2018 Catriona Gray of the Philippines was the one who crowned South Africa’s third titleholder.

Zozibini kicked off her career in pageantry with Miss South Africa in 2017. In 2019, she competed once again, successfully earning the Miss Universe 2019 title.

Her winning answer was applauded for breaking the stigmas of beauty.

“I grew up in a world where a woman who looks like me, with my kind of skin and my kind of hair, was never considered to be beautiful. And I think that it is time that it stops today. I want children to look at me and see my face and I want to see their faces reflected in mine,” she said.

Many Filipino pageant fans were hoping for a back-to-back win for the Philippines. Unfortunately, the country’s bet Miss Universe 2019 bet Gazini Ganados failed in her bid after failing to secure a spot in the Top 10.

But it was a “back-to-back” win for South Africa and the Philippines!

It seems like the crowns have just been bouncing off the two countries! We wonder what’s in store for the Philippines and South Africa next year. Will the crown bounce back to the Philippines?