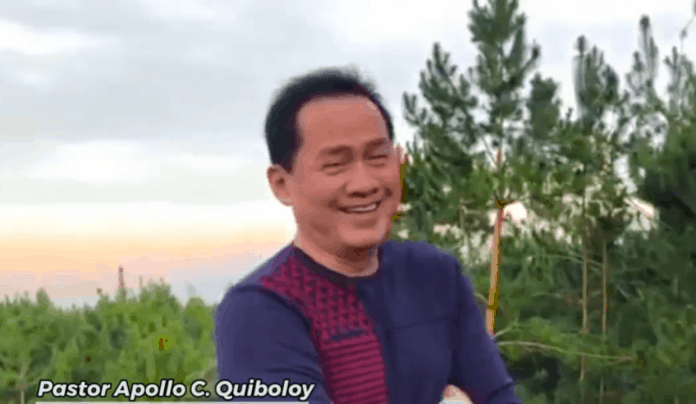 Self-proclaimed “Appointed Son of God” Pastor Apollo Quiboloy who claimed to have stopped an earthquake, has revealed the reason why he did not stop Typhoon Tisoy.

During the onslaught of Typhoon Tisoy earlier this week, comedian and host Ogie Diaz had asked the pastor to “stop” the natural disaster.

Philippine STAR reported that Typhoon Tisoy which brought intense rainfall and violent winds has left at least 12 people dead last Tuesday, as it struck parts of Southern Luzon, with Bicol and Oriental Mindoro as the most-hit regions.

In a video posted by Ito ang Buhay, that was also shared on his Facebook account, the religious leader explained that he wasn’t able to stop the typhoon because of his bashers.

Instead, he just prayed for it to just go away.

The religious leader said that he didn’t know what to do.

He had asked the public instead to be prepared, pray and ask for protection amid the calamities.

The Kingdom of Jesus church founder also stated that what wouldn’t stop is their desire to help others who are in need in whatever way his group can.

Quiboloy was earlier caught in a controversy with Vice Ganda, after the latter teasingly asked him to stop the traffic in EDSA and the longest-running TV series Ang Probinsyano.