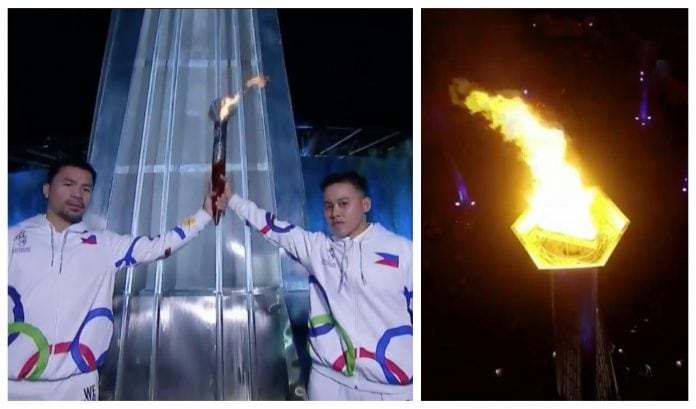 ‘You have to be prepared’: Director Floy Quintos on why SEA Games cauldron lighting was pre-taped

The lighting of the cauldron during the opening ceremony of SEA Games 2019 at the New Clark City in Capas, Tarlac last Saturday was pre-taped. This was confirmed by creative director Floy Quintos on Tuesday.

Torchbearers — boxing legend Manny Pacquiao and new boxing champ Nesthy Petecio — had already pre-recorded the scene where they were about to lit the P50-million cauldron.

In an interview with ABS CBN News Channel’s (ANC) Early Edition, Quintos explained that they had to do the “standard practice” due to the unpredictable weather.

“In many, many countries where the weather is inclement… you have to be prepared,” he said.

Quintos shared that the organizers have all agreed that it’s the “creative solution,” since the opening ceremonies were held in two different venues. For him, it was better safe than sorry given the weather.

Typhoon Tisoy entered the Philippine area of responsibility Saturday afternoon just as the opening ceremony was starting at the Philippine Arena in Bulacan.

“We were working with a Filipino and foreign team and we were all in agreement that no one can tell what the weather will be like,” he told Early Edition.

“Given the month it was happening, the original idea was to beam it. But anything could happen, at times like that you err on being sigurista. If it can happen live, why not but the storm is coming, we don’t know what the weather could be like,” he added.

Quintos also said that they just had to to their job in the show where the whole world is watching.

“I think people are angry and concerned about it (cauldron) and rightly they should be. But as creators, our job really is to make sure that nothing goes wrong,” he said.

The cauldron had earlier received criticisms for its costly price.

The Philippines is currently being hit by Typhoon Tisoy, bringing in heavy rains and causing the postponement of several SEA Games events.

‘It happened to me and Jinkee before’: Manny Pacquiao gives...