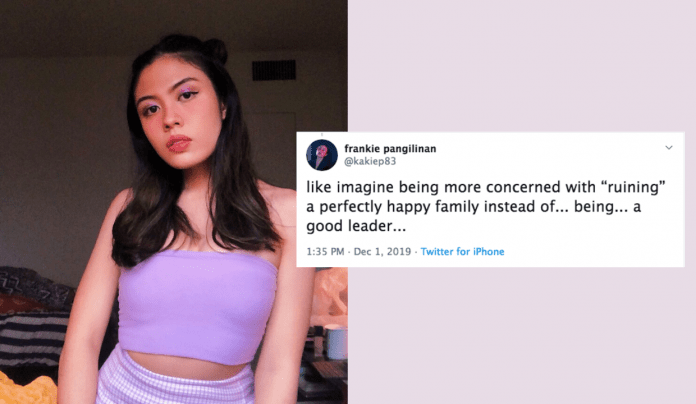 News broke out that President Rodrigo Duterte claimed that Sharon Cuneta wants Senator Kiko Pangilinan out of their home.

Daughter of opposition leader Senator Kiko Pangilinan and Sharon Cuneta, Frankie Pangilinan, was having none of it. The 19 year old took to Twitter to express her disappointment over the matter.

In another tweet, Frankie threw shade at the president.

“Imagine making yourself dinner in your tiny apartment and tucking yourself into bed with a warm blanket only to get a notification informing you your parents are arguing daw. It’s not either of your parents, it’s not your sister, not the dog, it’s rodi,” she said, referring to the president as “Rodi.”

Frankie moved to New York City this year to pursue her college education.

She continued on to say: “Like imagine being more concerned with ‘ruining’ a perfectly happy family instead of… being… a good leader…”

Frankie wasn’t done yet, the teenager posted a screenshot of a news article.

To disprove the president’s claims of her parents’ “troubled relationship”, she called in her sister Miel to take a photo of her parents at home.

It seems she has no regrets “coming for” the president and protecting her loved ones.

“Also I mean.. U (killing) my countrymen so I was coming for you either way this just mean i’d come for u on twitter,” she said.