‘Thank you so much for being with me even in the hard times’: Kim Seon-Ho expresses gratitude to Filipino fans 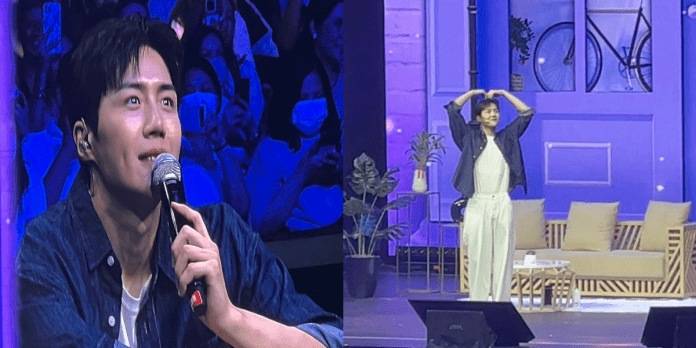 Start Up and Hometown Cha-Cha-Cha actor Kim Seon-Ho expressed his unending gratitude to Filipino fans who attended his first-ever fan meet in Manila on Sunday, January 22.

During his entrance at the “One, Two, Three, Smile” fan meet at the Mall of Asia Arena, he greeted his fans with a Filipino phrase “na miss ko kayo.”

“Thank you so much for being with me even in the hard times,” Seon-Ho said before the start of the event proper.

“I was very shocked tonight, I almost collapsed while singing… During the rehearsals, nakita kong napaka laki ng lugar, but I cannot imagine myself. I am very happy that ever since I arrived in the airport, palagi kayong nanjan para suportahan ako,” he added in his message, which was translated in Filipino and English.

Seon-Ho said he was given a warm welcome by the Filipino fans and felt comfortable interacting with them.

Fans were ecstatic to see the South Korean actor for the first time. Others were seen wearing wedding gowns pretending to be Seon Ho’s partner Shin Min-a. Lucky fans were also given chance to play and interact with the actor.

“I was very happy with you. I hope that all this minutes that we spent together was a big smile to all of you,” Seon-Ho said.

“I want to treasure this moment for a long time,” he added.

“Because of you, I can stand as an actor here, in front of you. Thank you and I love you. I promise to come back to see you again,” Seon-Ho noted.

Shortly after his hit series Hometown Cha-Cha-Cha Seon-Ho was caught up in a controversy involving an ex-girlfriend. The actor apologized after months of intentionally staying away from the limelight in July 2022.

“I am truly sorry for causing concern to many people with bad news. Looking back, I have reflected a lot on my shortcomings. All I can say is that I will put forth the effort to become a better actor and a better person. I am sorry,” said the actor.