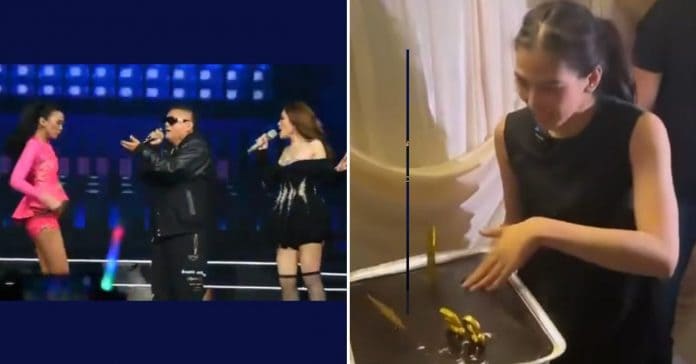 The younger Gonzaga was a guest performer at Toni’s one-night show held at the Smart Araneta Coliseum on the latter’s birthday on Friday.

“Pinag-usapan ‘yan for almost three days,” Alex who performed a rendition of Maymay Entrata’s Amakabogera, uttered when the stage LED display changed to “I am Alex,” a spoof of her sister’s “I am Toni” concert poster.

“Kaya pala trending ka for three days,” Toni joked, referring to Alex being on Twitter’s trending topics this week after drawing flak for smudging cake icing on a waiter’s forehead during her birthday party.

“Mahirap na mahirap na baka may cake kang dala,” Andrew told Alex in a singing tone after the actress-vlogger asked why he seemed to be distancing himself from her.

Alex has earlier apologized over the controversy involving a waiter, with the latter telling in a handwritten letter that the actress personally went to his workplace to offer her apologies.

The 35-year-old also said sorry to her family, for causing “pain and embarrassment”.

“On my birthday, God taught me a hard and important lesson. Humility, kindness and better judgment,” said Alex.