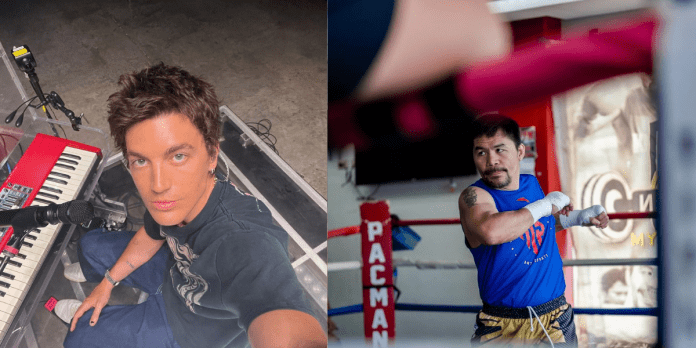 LANY lead singer and guitarist Paul Klein on Sunday has invited Filipino boxing champ Manny Pacquiao to watch their “A November to Remember” concert in Manila.

Apparently, Paul is one of the professional boxer’s thousands of fans all over the globe.

“You guys know Manny Pacquiao is, right? He is the greatest boxer of all time from the Philippines,” Paul said on stage during the third night of their concert at the MOA Arena.

“I just wanna say, Manny Pacquiao if you are in the Philippines, you are invited to come to our show on Tuesday and Wednesday. We love to have you!” he said.

The American pop-rock band surprised fans as they performed “dancing in the kitchen” with Filipino singer-songwriter Juan Karlos Labajo during Day 3 of their five-day Manila concert.

Fans were also shocked when LANY left the stage to continue singing at the upper level of the arena as he interacted with his fans.

Several trending videos were also uploaded by fans sharing their “unique” experiences during the concert.

A merch seller from Pasig City on Friday, November 11, did not expect that she could attend the LANY concert for free!

‘It happened to me and Jinkee before’: Manny Pacquiao gives...