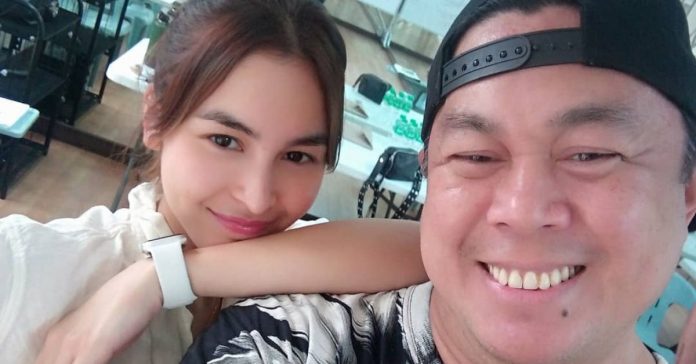 Julia Barretto admitted she still has yet to make amends with her father Dennis Padilla.

The “Expensive Candy” star revealed during an interview with broadcast journalist Karen Davila that she’s not on speaking terms again with her dad after reconciling with him almost two years ago.

She reasoned that she’s tired and afraid of “getting hurt” again.

The actress maintained, however, that she doesn’t find it difficult to forgive her dad and hopes that they can make it work “in God’s time”.

“It’s not the forgiveness, it’s (forgetting). But there’s just a lot of fear because I don’t know what’s gonna happen.

“But forgiveness, of course, definitely, that’s my own peace of mind, di ba?

“Hindi ko ipagkakait ang forgiveness but I’m just not ready. I think, there’s just been so much pain over the years since I was young, so parang I got tired of the same thing,” said the actress.

Although Julia said Dennis has been trying to fix their relationship, she said she needs “more love and more protection” from him.

“I just feel like he should be my number one protector, and that’s not really what I’m getting right now from him, so it does hurt. It does hurt because dapat siya yung tinatakbuhan ko, di ba? But, it’s sad that I can’t,” said Julia.

On the other hand, Julia said she was pained but grateful when her younger brother Leon stepped up to protect her and sister Claudia when Dennis called them out on social media for not greeting him  on Father’s Day.

“It did pain me to watch him go through what I had to go through but he’s brave. He’s very brave. I love him because now he’s the man of the house. And he’s so protective and he’s the youngest pa. I’m grateful he spoke up and he protected us,” said the 25-year-old.