MIRACLE BABY: Couple from Batangas proves that God’s timing is never late but always on time 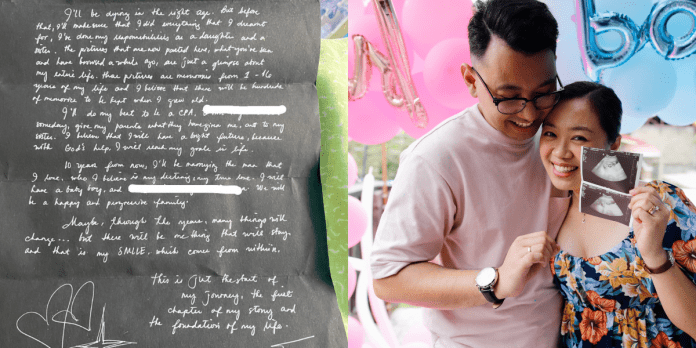 Can you remember the last time you wrote a letter to your future self?

Back in high school, this woman from Batangas wrote a letter to her future self. Just like any other student, she wanted to finish college and marry the love of her life.

But before she got married in 2021, she accidentally found the letter again and realized that all of her wishes came true except for one—to have a baby boy.

The last list in her letter was a little bit of a challenge. Several doctors said that Elyssah Janne Venegas Gomez had a 10% chance of conceiving a baby, after she was diagnosed with endometriosis, PCOS, posterior adenomyosis, and myoma in 2017.

When they were still dating, she said that she opened up about her reproductive condition to her partner. But despite that, Elyssah and Mattheus got married in September 2021.

After getting married, Elyssah and Mattheus tried to have a baby for several months. Every time her period gets delayed, she would always take a pregnancy test. But it left the couple brokenhearted again and again.

When they decided to postpone their plan to have a baby, a miracle happened.

One day, Elyssah felt so sleepy for a couple of days which is very unusual for her. She then decided to take another pregnancy test. After experiencing disappointment in the past, Elyssah did not expect anything at all.

It turned out positive! But she was still hesitant because the second line was a bit blurred. So Elyssah decided to take 10 pregnancy tests just to confirm.

Everyone was excited. Their family planned a gender reveal! But the couple couldn’t wait for another week to know the gender of the baby. Elyssah and Mattheus decided to take a sneak a peek at their baby’s gender!

Elyssah is expected to give birth to their baby boy, Lev, on September 22, 2022.