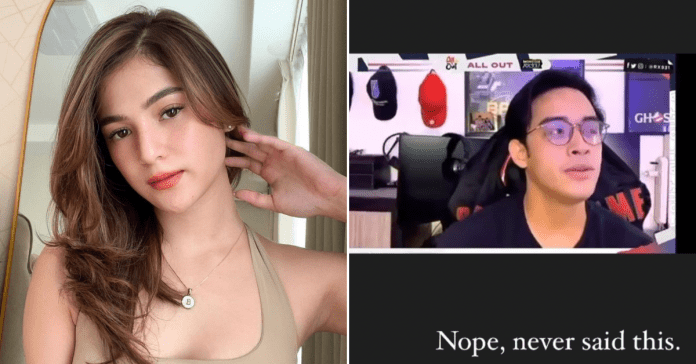 Diego Loyzaga said ex-girlfriend Barbie Imperial reckoned he did not cheat on her, but the actress denied such claims of the actor.

In a recent interview with Rico Robles of Monster Radio RX 93.1, Diego talked about his past relationship with Barbie, where he recalled being linked to an actress.

At that point, Diego made clear that he never cheated on Barbie when they were together.

“It became a thing for us artistas na parang pag may lock-in taping may nangyayari, may ganun-ganun. But I can sit here in front of you right now and tell you, nothing ever happened between me and her like that,” said Diego.

He added, “I can happily sit on this chair and say I never cheated on Barbie. She knows that.”

Diego then cited his recent meeting with the actress, where he said Barbie affirmed he did not do such thing.

“I saw her two weeks ago at a club. And I said to her, you know, Bie, after everything we went through you really do know that I never cheated on you. And she said, ‘Diegs, I know, I know.

“Despite all the stories, are you sure you believe me when I say I never cheated on you. ‘Coz I hear stories that you believe that. And she’s like, ‘No Diegs, I know, I know’.

“My friends know that, all my closest friends, my friends in the industry know that I never did,” Diego said firmly.

Barbie, however, took to Instagram stories to share snippets of Diego’s interview, disproving her ex-boyfriend’s claims about their supposed conversation.

“I never said this,” said Barbie.

Barbie and Diego were in a relationship for a year, before calling it quits December last year.

“Never said anything bad after the break up. But I think telling people I said something I didn’t say is foul,” said Barbie in her next Instagram story.