Kim Chiu reacts to criticisms over tweet about BBM’s spokesperson 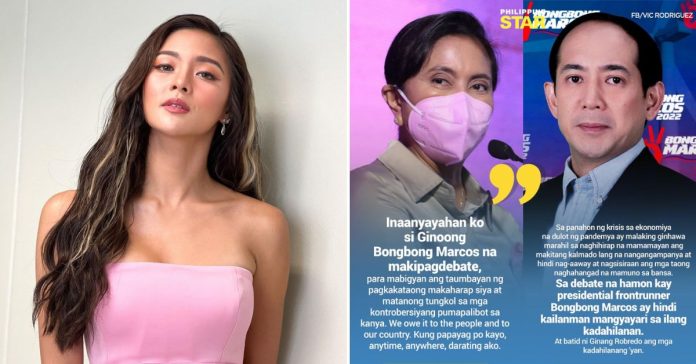 Presidential aspirant, Vice President Leni Robredo, recently dared her rival Marcos to a one-on-one debate as she said that the latter is the lone candidate “who has yet to face the nation in a debate that includes all the other candidates.”

“The public should have the chance to confront him about this… Me and the other candidates have already presented ourselves, but the public had no opportunity to learn the truth about the issues that he is facing,” said Robredo in a statement.

“I am therefore inviting Mr. Bongbong Marcos to a debate, to give the Filipino people a chance to face him and ask him questions, particularly those regarding the many controversies surrounding him. We owe it to the people and to our country. If he agrees, anytime, anywhere, I will be there,” added Robredo.

Marcos’ spokesperson Atty. Vic Rodriguez, however, issued a statement that said the debate will never happen, as the former senator and son of the late dictator Ferdinand Marcos Sr. prefers to not resort to “negative campaigning.”

Reacting to a quote card about the Marcos camp’s response to Robredo’s debate proposal, Kim expressed her thoughts about the matter in a tweet.

Kim’s tweet, however, received criticisms from netizens, mostly from pro-BBM supporters, who told the actress that it is Rodriguez’s job as a spokesperson to speak on behalf for Marcos.

In a subsequent tweet, Kim brushed off the negative comments, saying she was already prepared for the bashing.

Kim, who’s an all-out supporter of Robredo, previously became a target of flak online after her viral “Bawal Lumabas” gaffe in 2020 when she spoke up against the congress’ non-renewal of her home network ABS-CBN’s TV and radio broadcast franchise.