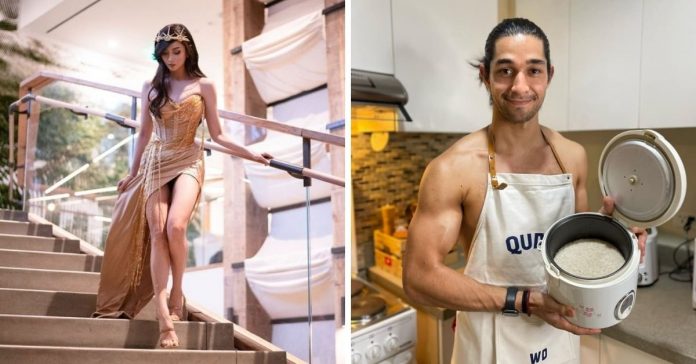 Alodia on Thursday stunned netizens when she posted a photo of herself in a form-fitting gold gown from a red carpet event, which came with an interesting caption.

Fans in the comments section couldn’t help but think that Alodia was alluding to her ex-boyfriend Wil Dasovich.

Alodia, however, later clarified in a separate Facebook post that “yesterday’s post was based on a meme quote I saw somewhere on the intarweb but a few people took it seriously so sorry for the confusion.”

She added, “I’ve been posting memes daily for a while now because I like sharing funny things. Even have a page dedicated to it which has been up for almost a decade.”

A day after, Wil uploaded a photo of himself wearing an apron while holding cooked rice and playfully wrote in caption: “Hi ako nga pala yung sinaing mo.” Fans assumed it was his response to Alodia’s Facebook post.

Some netizens who got kilig over Alodia and Wil thought that the ex-couple was going to have a “comeback”.

Here are some of their comments:

Alodia and Wil surprised their fans in November last year after the former revealed that they had called it quits after four years of being in a relationship.

Shortly after her revelation, Alodia answered fans’ questions about the possibility of a reconciliation. “Mayroon pa bang comeback? We don’t know. Nakailang comeback na kasi, you know? Things happen for a reason.”

READ: Is Alodia Gosiengfiao open to reconciliation with Wil Dasovich?