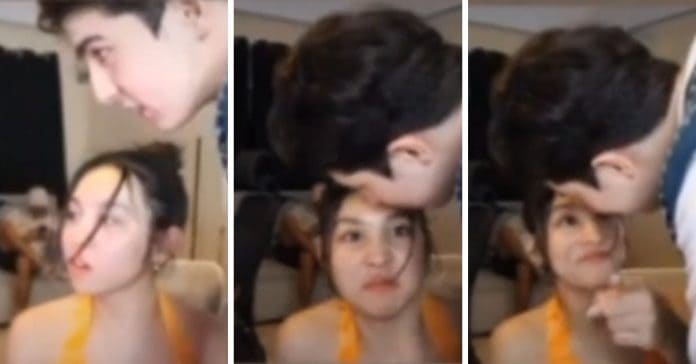 Fans were kilig after Mavy Legaspi was “caught in the act” of doing this sweet gesture to rumored girlfriend Kyline Alcantara.

A TikTok fan page dedicated to the Kapuso stars recently shared a clip of the two having a conversation in front of a computer.

Kyline appeared to look closer at the camera, when Mavy blocked her view and seemingly leaned in to kiss the actress on the forehead.

Looking all surprised, Kyline reminded Mavy that they were being filmed, pointing to the camera behind them.

“Naka-video!” said Kyline, making both of them laugh in embarrassment and hide their faces from the camera.

The video has since gone viral, currently having more than three million views on the video-sharing platform.

Fans, in the comments section, couldn’t help but speculate that the two are already in a serious romantic relationship.

Kyline and Mavy first sparked romance rumors after the latter posted via Instagram a photo of the mystery girl who’s making him happy–which fans believed to be the actress.

Mavy also penned a sweet message for Kyline on her birthday last September.

The two are onscreen partners in GMA romance drama series I Left My Heart in Sorsogon.