From romance to ‘action noir,’ Han So-hee is all in for upcoming Netflix series My Name 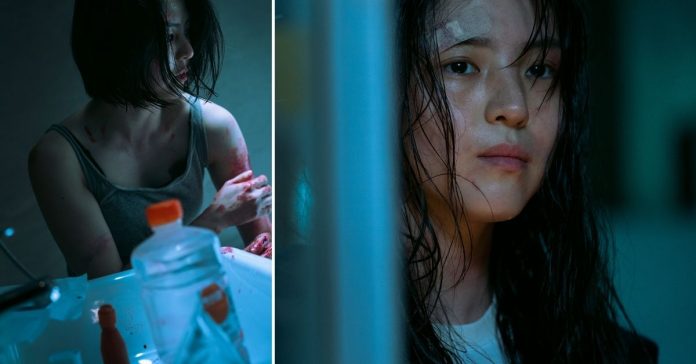 “All in,” was how the director of upcoming action series, My Name, Kim Jin-min described actress Han So-hee. After the success of the romantic South Korean drama Nevertheless, So-hee is making a 180-degree turn with her career as a rising actress.

The 26-year-old will be starring in Netflix’s upcoming gritty thriller series My Name as a vengeful daughter seeking to avenge her father’s death. So-hee’s character, Ji-woo puts her trust in a crime ring and enters the police force under their direction.

Ji-woo is the complete opposite of Nevertheless’ Yoo Na-bi, an art student simply exploring romance and all its wonders. This new role was definitely unfamiliar terrain for So-hee.

“At first, I actually thought I’d be able to pull it off easily,” she explained to the media at My Name’s Netflix press conference today.

She admitted there was a lot of pressure working on an action series since her performance affects everyone in the cast.

“It requires a lot of time. It’s not just me doing it alone. I have to make one good choreography with my partner in every single scene so it was a lot of pressure. I was also worried about hurting anyone so I had to be really careful all the time so that was quite challenging,” she shared.

True enough, the whole cast for the action-packed series – Park He-soon, Ahn Bo-hyun, Kim Sang-ho, Lee Hak-ju and Jang Yull – disclosed that there was very limited use of stunt doubles on set.

Director Jin-min mentioned that “99% of the action” was all done by the cast themselves.

“They probably did more percentage of the action than any other action film or series you’ve seen out there before,” he said.

Jin-min, who directed hit series Extracurricular made a big revelation during the press conference as he spilled what went down during his first meeting with the show’s protagonist.

He recounted that So-hee immediately promised him that she was going to train her hardest for her role as Ji-woo.

“When I first met her, she promised me that she was going to practice hard and I told her that if you don’t practice action so much then I don’t want to work with you on the action series,” he revealed.

To his surprise, So-hee was all in. She put in all her effort that made the series possible, even gaining 10 kilograms of muscle weight to fit the part.

Known for her “beautiful roles” in The World of the Married and Nevertheless, Jin-min told So-hee to jump into this rare chance to play a harsh and physical role. And so she did.

Watch out for this new side of Han So-hee as she takes on the solemn path of seeking revenge as Yoo Ji-woo. My Name premieres on October 15 on Netflix.