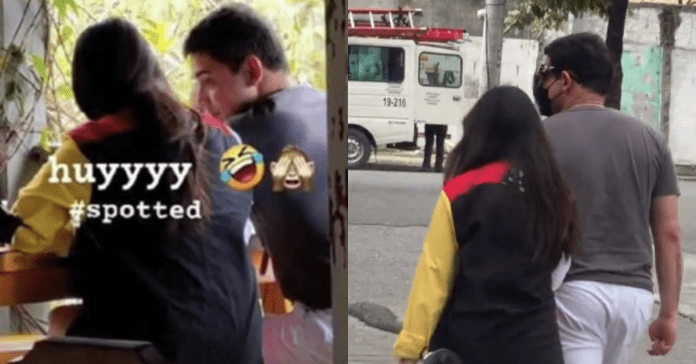 Paolo Contis was “spotted” in photos with a mystery girl, causing a stir on social media amid his breakup controversy with LJ Reyes.

On Thursday, candid photos of the Kapuso actor made rounds online where he was seen hanging out with an unidentified woman.

The photos, which were supposedly first posted via My Day, came with the text “Nagsusubuan habang kumakain. That’s so sweet.”

A TikTok user, on the other hand, shared on Friday a video of a man strolling along the road with a woman clinging on to his arm.

The two, despite their faces being covered with face masks and shields, were quickly identified by some netizens as the same persons from the previous photos because of their identical clothes.

The photos and video have since sparked speculations on the identity of Paolo’s alleged new lover.

LJ Reyes recently spoke in an interview with Boy Abunda to set the record straight on the end of her six-year relationship with Paolo, who was her boyfriend and eventually live-in partner. (READ: LJ Reyes has no plans to reconcile with Paolo Contis )

In the interview, the emotional Kapuso actress became speechless when asked whether a third party or money was involved in their breakup.

Paolo, on the other hand, has been mum on the issue.

RELATED: LJ Reyes recounts what her son Aki said amid her breakup with Paolo Contis