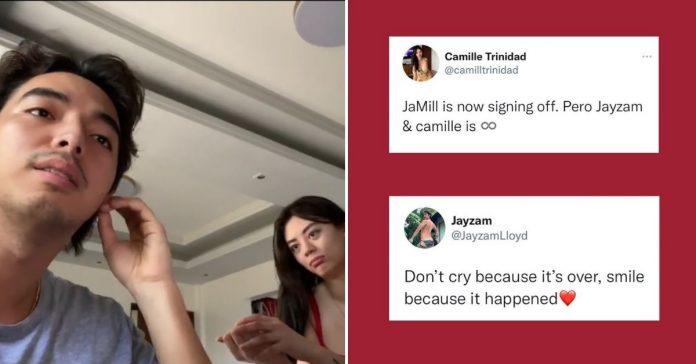 Jayzam Manabat and Camille Trinindad, also known as the vlogger couple JaMill, are officially quitting YouTube for the sake of their relationship.

On Thursday, JaMill finally addressed the speculations surrounding their “deleted” YouTube channel after fans discovered that the account with over 12 million subscribers has become unavailable on the video-sharing platform.

Jayzam and Camille took to their Facebook page Jamill to explain that it was their personal decision to end their YouTube vlogging career and live a “simple, normal life.”

Jayzam went on to share that the decision stemmed from a “small argument” that they had, as well as those putting their relationship under pressure and questioning if their romance is for real or just for show.

Camille was the one who did the deletion of their YouTube account without Jayzam’s consent, but the latter said they want to prove to themselves that their relationship could go on even after leaving the world of vlogging.

The two actually tried contacting the YouTube team to recover their channel to somehow release a video to their supporters to explain their decision, but was told that there’s no chance of getting it back.

Jayzam and Camille admitted that they feel kind of sad over all the memories they had shared with fans and supporters through their vlogs, but hoped they would respect and understand their choice to permanently delete their channel. They stressed that it’s for the “betterment” of their relationship as a couple.