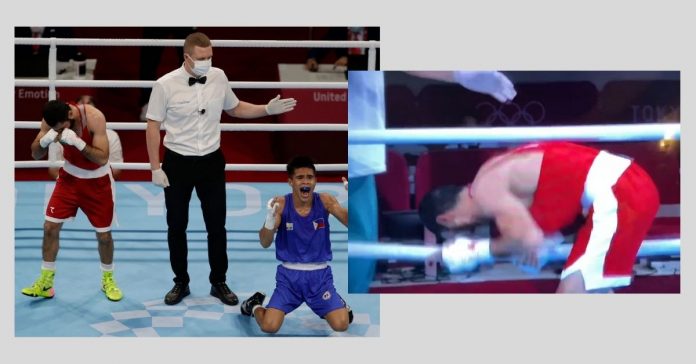 Carlo Paalam’s foe didn’t escape the eyes of netizens after he walked out of the ring when the Pinoy boxer was announced as the winner in the Tokyo Olympics event.

Paalam secured a bronze medal for the Philippines after defeating reigning Olympic champion and gold medalist Shakhobidin Zoirov of Uzbekistan in the men’s flyweight boxing quarterfinals via split decision on Tuesday, August 3.

The Cagayan de Oro native is set to compete with Japan’s Ryomei Tanaka in the semifinals round on Thursday, August 5.

While Pinoy netizens took to social media to congratulate and celebrate Paalam’s win, some netizens posted short clips showing the reaction of Paalam and Zoirov during the announcement of the winner.

Twitter users made hilarious and witty comments after Zoirov sighed in frustration and immediately made his way out of the boxing ring while Paalam knelt on the floor and became emotional.

Netizens observed how Zoirov did not even manage to bid “goodbye” to Paalam –making puns out of the Pinoy boxer’s surname.

Here are some of them: