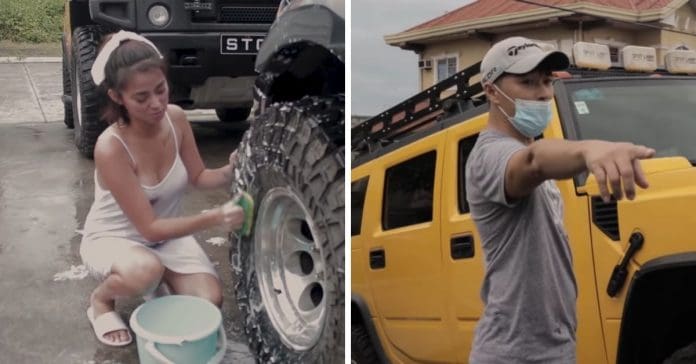 Sexy star AJ Raval was confronted by her dad Jeric Raval after seeing what she was wearing in her carwash vlog.

In a 10-minute video uploaded on her YouTube channel on July 19, AJ washed her elder brother’s truck, previously owned by her former action star father, wearing a white cami dress.

“Hindi ko talaga alam paano mag-carwash,” Aj said in the video, revealing that it was her first time doing it.

“Baka mahuli ako ng tatay ko nito,” she added in the video, which is currently at the fourth spot of YouTube’s trending list and has over two million views as of writing.

As she was about to finish her carwash vlog, Jeric appeared and couldn’t help but have a say on her daughter’s get-up.

The young actress shared that she did not inform her father about the movie, knowing that he would disapprove of the sexy project.

Back in April, she shared that her father already gave her his support to go daring but with limitations.