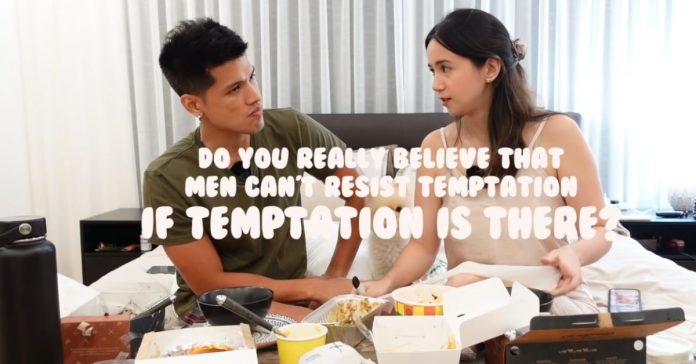 Vin Abrenica recently shared his thoughts about men not being able to resist the temptation to cheat.

The actor released a mukbang Q&A vlog with his fiancee Sophie Albert where they answered questions they had never asked each other before.

Sophie, at one point in the vlog, asked Vin: “Do you believe men can’t resist temptation if temptation is there?”

The newbie dad went on to state that it’s unfair to say that men can’t resist the temptation to cheat, saying that they have a choice whether or not they will do it.

“Mayroon talagang temptations na nangyayari sa atin. Ang nakakalimutan ng statement na ‘yun is God gave us a choice and that’s his gift to humans, to man. Binigyan niya tayo ng choice to choose what’s right and what’s wrong. May taong cheater, will they always be a cheater all his life? Parang it’s a choice, he chose to cheat, or he chose to be tempted,” said Vin.

He added, “I think that’s unfair for guys. It’s not a matter of sex, biology. Kung lalaki ka or babae ka.”

For Vin, talking things out together with your partner is important, especially if something is not going well in your relationship, and you are thinking of splitting up.

“If it’s not working in the first place, kapag hindi mo nakuha, why would you get something from other girls? Why not consult your partner first? Sabihin ko sa’yo, ‘This is what I want.’ Hindi mo maibibigay, then okay hindi mo maibigay sa akin ‘yun, I think ‘yung relationship natin might be at risk.

“Kung makapag-agree kayo na at risk nga ‘yung relationship, kung ayaw niyo pa rin ang isa’t isa then at least you have a closure first. E di maghiwalay kayo. Then you do the stuff that you want to do.

Vin’s older brother Aljur Abrenica is currently embroiled in a controversy after his father-in-law Robin Padilla revealed that he and wife Kylie Padilla have parted ways due to alleged cheating.

Kylie maintained that she and Aljur are working on a “healthy” co-parenting setup for their kids Alas and Axl.

Aljur, on the other hand, has been mum on the issue.