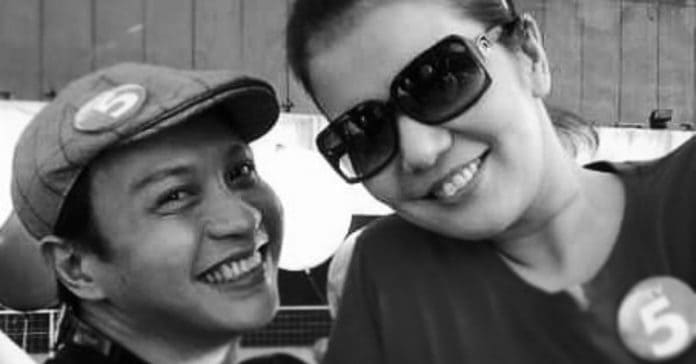 Amy Perez is mourning the death of her friend and former co-host Hans Martel who passed away on Wednesday, July 14.

The It’s Showtime host took to Instagram to thank the late comedian for all the good memories they shared together when they co-hosted TV5’s Face To Face.

“A true friend is never truly gone. Their spirit lives on in the memories of those who loved them,” Amy began with a quote alongside a black and white photo of them together.

“Salamat sa love mo at lahat ng magaganda nating memories together. You will always be my favorite ‘SAWSAWERO’.

“I will miss you. No more pain. Rest now in the loving arms of our Lord Jesus Christ. My deepest sympathy to his family,” added Amy.

Amy and Hans were former co-hosts in the now-defunct TV5 talk show Face to Face which aired from 2010 to 2013.

“Gone too soon! You fought a hard battle. Thank you for giving it your all. I know you tried so hard for us. It’s ok, you fought for 3 months. We fought the battle with you. And now you can rest in peace,” wrote Jean.

In an online fundraiser launched for her brother in June, Jean revealed that Hans was admitted to the hospital “due to pneumonia in immunocompromised state” and had been in and out of the hospital.

No other details were given about his cause of death as of writing.

"I can’t believe it’s finally happening!”Kathryn Bernardo is more than excited as her future home is finally coming together. bit.ly/37gynM3 …

Kathryn Bernardo is more than excited as her future home is finally coming together.  On Instagram, the actress shared snaps of her and her niece Lhexine at the construction site of her soon-to-be house.   “Slowly getting there.. I can’t believe it’s finally happening!” she wrote in…
View on Facebook
· Share

LOOK: These celebrities lauded boxer Nesthy Petecio after bagging the second medal for the Philippines at the Olympic Games in Tokyo. The 29-year-old Davaoeño made history as the first Filipina boxer to win a medal in the Olympics. Read more: bit.ly/3rQh1PG …

Carlo Paalam’s foe didn’t escape the eyes of netizens after he walked out of the ring when the Pinoy boxer was announced as the winner in the Tokyo Olympics event. Paalam secured a bronze medal for the Philippines after defeating reigning Olympic champion and gold medalist Shakhobidin Zoirov of …
View on Facebook
· Share

These celebrities lauded boxer Nesthy Petecio after bagging the second medal for the Philippines at the Olympic Games in Tokyo. …

These celebrities lauded boxer Nesthy Petecio after bagging the second medal for the Philippines at the Olympic Games in Tokyo. Nesthy clinched the silver medal after a unanimous decision win for Sena Irie of Japan in the women’s featherweight boxing finals on Tuesday, August 3. The 29-year-ol…..
View on Facebook
· Share