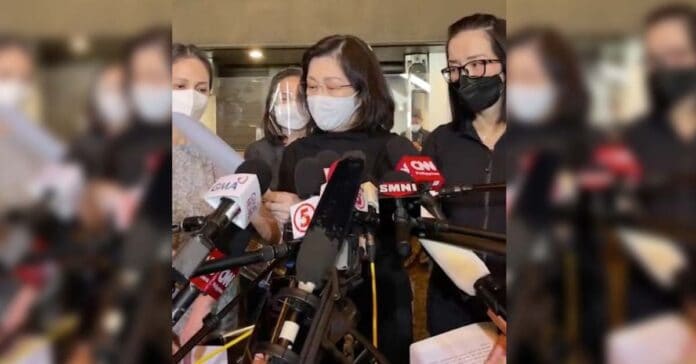 In the video, Pink Aquino-Abellada read their statement for the press, confirming that their only brother died peacefully in his sleep. She was joined by the three other sisters — Ballsy Aquino-Cruz, Viel Aquino-Dee and Kris.

“It is with profound grief that on behalf of our family, I am confirming that our brother Benigno ‘Noynoy’ S. Aquino III died peacefully in his sleep.

“His death certificate pronounced his death at 6:30 a.m. due to renal disease secondary to diabetes,” Pinky said.

In the same statement, they revealed that the former president was in and out of the hospital even before the pandemic.

Their family has also thanked their brother’s supporters, staff, friends and family who were always with him.

“Mission accomplished ka, Noy. Be happy now with Dad and Mom. We love you and we are so blessed to have had the privilege to have had you as our brother. We will miss you forever, Noy,” she ended.

Celebrities and personalities have also shared their thoughts and prayers on the rattling death of the country’s former leader.

READ: ‘Thank you for your service to the nation’: Celebrities mourn death of PNoy

Kris Aquino shares what to expect on her wedding day

Kris Aquino happy to feel like a ‘normal, regular person’...

Kris Aquino recalls her and Mel Sarmiento’s ligawan stage: ‘Out...

Kris Aquino, Mel Sarmiento thank fans for their support in...