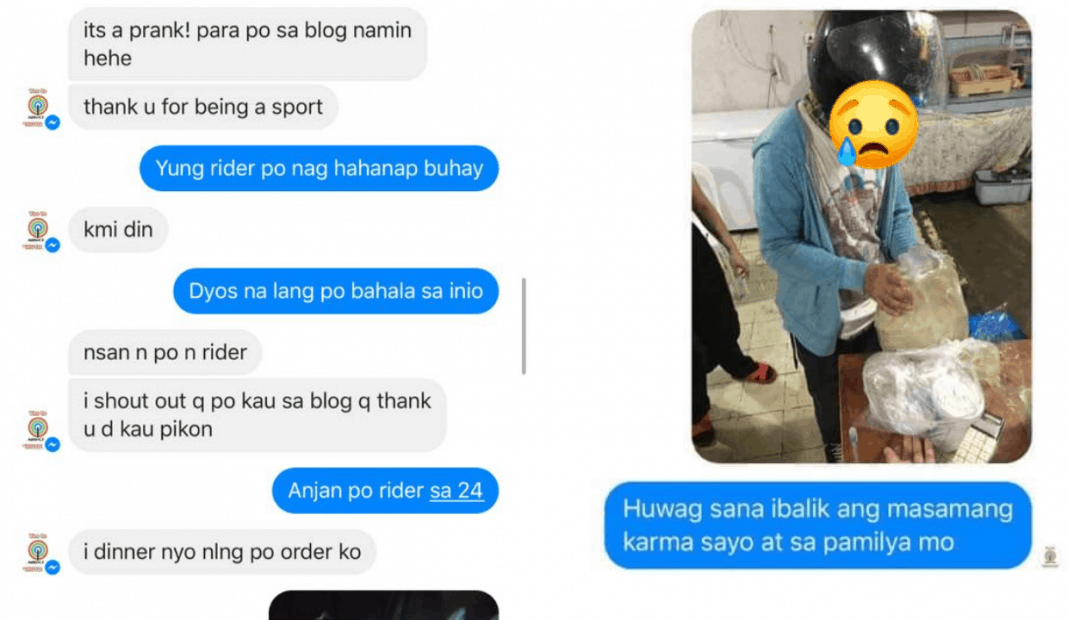 A restaurant based in San Pedro, Laguna aired its frustration after receiving an order from a customer only to find out that it was a “prank for a blog”.

In a Facebook post, the Chacha Special Binalot Sa Dahon restaurant’s page shared the experience of falling prey to a certain Reynan Ganete who claimed to be a “blogger”.

The Facebook page shared screenshots of the conversation with the Facebook user from when the order was made, to when the rider was on his way to deliver the food, up until the time the restaurant was told of the cancellation.

The customer ordered food amounting to P1,061 and asked the restaurant to bring change for P1,500.

After asking for a landmark, the restaurant then informed the fake customer that the rider was heading to his address.

That’s when the customer said “cancel na po,” saying that he and his cousin opted to have pancit canton instead.

The restaurant then told him that it was impossible to make the cancellation, since the order was already prepared and being transported.

The customer insisted they would be having pancit canton and reasoned that his cousin had a sudden change of mind.

The restaurant shared that the rider even got caught in the rain while on his way to deliver the food to the address, which also turned out to be fake.

When the restaurant expressed its disappointment over the last-minute cancellation, the customer showed no remorse and messaged back: “It’s a prank. Para po sa blog namin hehe. Thank you for being a sport.”

He even promised to give the restaurant a shoutout in his blog.

Frustrated with the customer’s behavior, the restaurant schooled the fake customer for being inconsiderate with the rider who was just trying to earn a living.

According to the restaurant, it received messages offering to buy the cancelled order, but decided to give it to the rider and the staff.