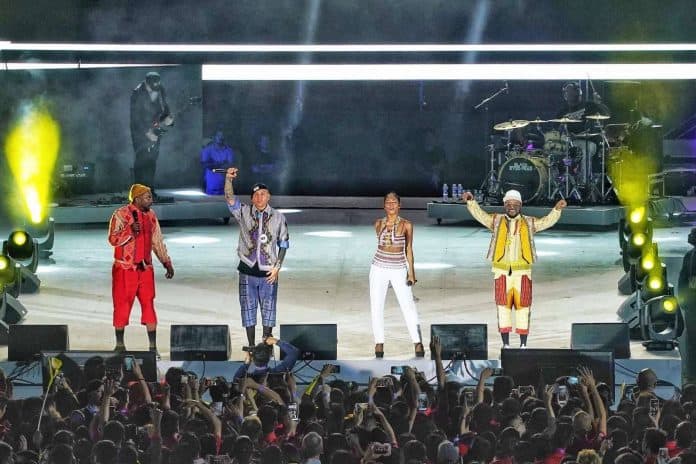 Will.I.Am, Apl.De.Ap and Taboo swapped their usually multi-colored, funky urban wear with OOTD made of indigenous designs and textiles, and showcased the Philippine flag’s colors — blue, yellow and red plus white from Pinay singer J Rey Soul, who joined them on stage at New Clark City in Capas, Tarlac.

In an Instagram post, Apl.De.Ap, the Fil-Am member of the group, revealed that what they wore were created by fashion designer Renee Salud.

“I love how these outfits came out!” Apl said, thanking the veteran designer.

Cathy Villarba, who is part of Apl’s local management team, further shared the story behind their outfits in a public Facebook post.

According to Cathy, Will.I.Am, Apl and Taboo were dressed in bomber-style, non-traditional barong made of cotton and abaca leaves. Their cargo pants used inabel material with binakol patterns from Ilocos, while their vests combined Yakan weaves from Basilan and Inaul from Maguindanao.

BEP loved the colors and material especially since “they were hand-made by indigenous people from Mindanao,” she said.

“When Apl asked if I (knew) any designers that can make authentic traditional barong for the Peas, the first person in my mind was Mama Renee Salud. Thank you Mama Renee for accommodating Apl’s request to make a traditional mix with modern style barong,” Cathy further wrote in the public Facebook post.