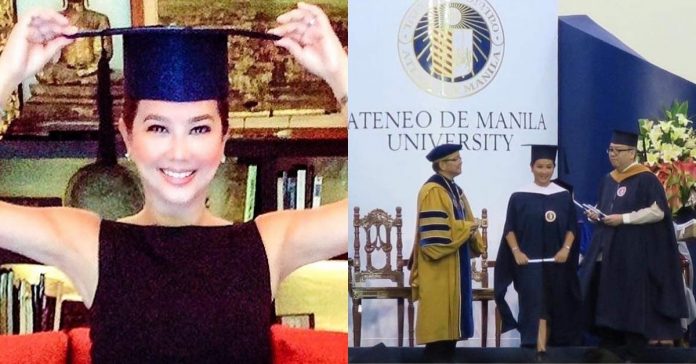 The broadcast journalist Korina Sanchez reminisced on her graduation from her Master’s degree studies back in 2016.

Recently, Korina uploaded pictures of her graduation from Ateneo de Manila in 2016 on social media to commemorate the anniversary of her graduation. She also said that she received the photos from “three different people”.

“Awwwww….I received these photos from three different people today,” she wrote on instagram. “ 👉Anniversary nga pala of my graduation from Masters in Journalism from the Ateneo a few years back.”

Korina completed her master’s degree in journalism at the Ateneo De Manila University back in 2016, while also juggling being a renowned reporter at ABS-CBN and helping her husband’s presidential campaign.

An article from Philstar stated that back then, Korina shared on a social media post that she considered dropping out of her classes, but she decided against it. In this year’s post, the anchor told her Instagram followers to “just do it.”

“I was attending classes online while anchoring TVPatrol everyday. 💪🏽 And studying from an “older” mind and graduating [with] a masters degree has been one of the most exhilarating experiences yet,” she wrote.

Charlene Gonzales congratulates her twins for graduating high school amid...