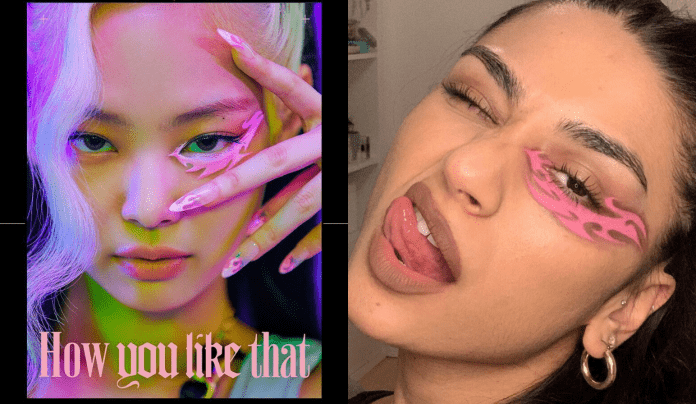 Nushafarin, who shares her works online, took to Instagram to speak up on the alleged plagiarism of Maeng, the long-time makeup artist of Blackpink.

YG Entertainment previously revealed teaser posters of Blackpink members Jisoo, Jennie, Lisa and Rose for their upcoming comeback along with their pre-release single titled How You Like That on June 26.

Nushafarin wants YG Entertainment and Maeng to be held accountable for allegedly copying her pink flame under eye makeup that Jennie had in the superstar group’s third set of comeback posters.

The makeup look was identical to the photos Nushafarin uploaded on her Instagram in February.

“I have no problem with people being inspired by my work or recreating them, with credit of course. In fact, it’s very flattering when people feel inspired by my makeup. However, it is unacceptable when a BIG brand like YG, pays an artist to recreate my work, without reaching out to me and not giving me any credit. This is not right and they have had similar incidents with their creative choices in the past,” wrote Nushafarin in a statement she posted on Instagram.

Nushafarin said she already tried reaching out to YG and Maeng but to no avail.

The artist, who lives in Birmingham, also clarified that she never claimed to be the creator of the “flame” eye makeup but noted that hers is a unique one, dismissing comments saying that it is a “very common makeup trend”.

“The look is unique because of the placement, under the eye, only on one eye, with a unique flick on the inner and outer corner. The eye look was not changed at all, it was kept pink, and even the shading around the liner was replicated,” Nushafarin pointed out.

Nushafarin also went to thank her supporters and fans of Blackpink who showed their support.

Read her full statement below:

As of writing, YG Entertainment and Maeng have yet to address the issue.