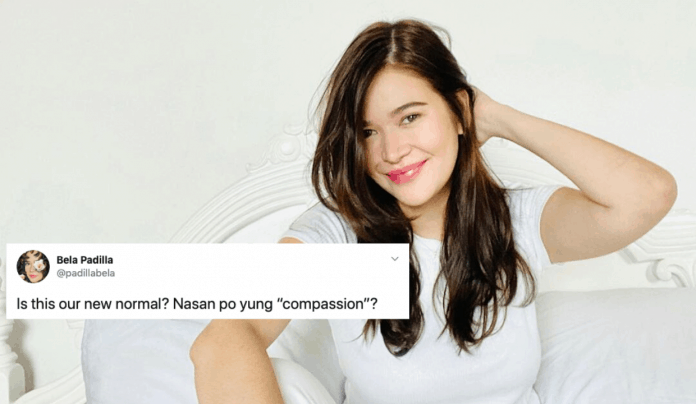 Kapamilya star Bela Padilla called out a police officer who hit a civilian for leaving his home despite being in possession of a quarantine pass.

In a tweet, the actress cited a video from DZMM TeleRadyo wherein an officer was seen hitting and cursing a civilian for leaving his home in Quiapo, Manila.

“Is this our new normal? Nasan po yung ‘compassion’?”

“Lahat ng lalabas sa walang oras, babarilin na,” was just one of the many taunts the officer said in the 40-second video.

Padilla asked for compassion after Department of Justice Secretary Menardo Guevarra said no arrest will be done for Senator Koko Pimentel’s breach of hospital protocol.

He said: “When people are prone to commit mistakes or violations of the law, the DOJ will temper the rigor of the law with human compassion.”

The DOJ later on said that “it will investigate and resolve Sen. Koko Pimentel’s case in exactly the same way that the DOJ handles all other cases brought before it.”

In another tweet regarding the video, Padilla said violence is not an answer as it also strips a person’s dignity.

“I understand that, madami po talagang pasaway. But violence is not the answer. It doesn’t only hurt physically but it also strips off a person’s dignity. Sa panahon ngayon LAHAT TAYO kelangan habaan ang pasensya…”