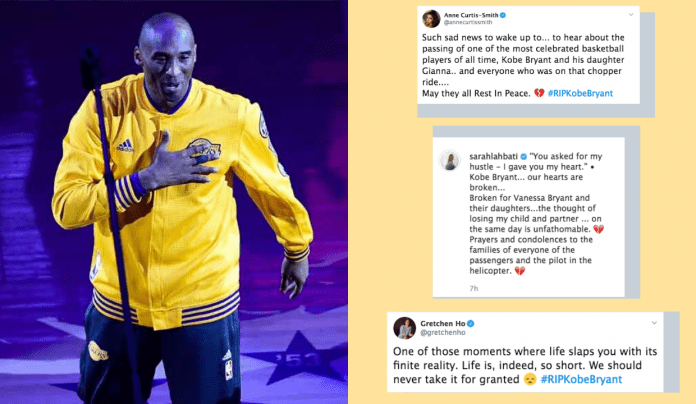 The whole world was shocked after finding out that NBA legend Kobe Bryant died from a helicopter crash earlier today (Sunday, U.S. time).

The 41-year-old basketball player perished with his 13-year-old daughter Gianna “Gigi” Bryant when a fire reportedly broke out in their S-76 helicopter. All nine passengers on board were killed in the crash (READ: Basketball legend Kobe Bryant killed in helicopter crash.)

Filipino personalities along with fans all over the world mourned the death of the Los Angeles Lakers superstar.

Athlete and television host said Kobe’s death is “one of those moments where life slaps you with its finite reality.”

“Such sad news to wake up to… to hear about the passing of one of the most celebrated basketball players of all time, Kobe Bryant and his daughter Gianna.. And everyone who was on that chopper ride…. May they all Rest In Peace. #RIPKobeBryant.”

Actress Sarah Lahbati offered her prayers and condolences to the families of those who passed from the tragedy, especially Vanessa Bryant, Kobe’s wife and Gigi’s mother.

The new Darna Jane de Leon said the basketball player’s death is a reminder of life’s uncertainties. “This reminds us that we need to value our life and be happy with our loved ones. Because we wouldn’t know what life holds ahead of us. #RIPKobeAndGianna,” she said.

Young actor Bailey May reminded his fans that “tomorrow isn’t promised for any of us.”

“Today is a reminder that tomorrow isn’t promised for any of us. Let go of anger. Fix broken relationships. Smile. Laugh & Love more & more. Rest In Peace Kobe and Gianna. We pray for your family and for the families of those who lost their lives #ripkope,” he wrote on his Twitter.

Singers Ogie Alcasid and Gary Valenciano also expressed their sadness over the sudden passing of the athlete who served as an inspiration to sports fans all over the world.

“I am still in shock. As an NBA fan, Kobe was just one of those players that inspired millions. Rest in peace Mr. Bryant and his lovely daughter Gianna,” Ogie wrote on Instagram.

Gary V said, “I watched his last game. I sensed it would be one for the books and it certainly was. Kobe made 60pts to lead the Lakers to a victory. So I took it upon myself to take some of these shots of a truly memorable game as he bid farewell to basketball. Now we all bid farewell to you @kobebryant. Thank you for the years of passion you put in to the game of basketball; lessons we all can apply to the game of life.”

Comedian-artist Michael V was so moved by Kobe’s passing that he did a tribute sketch and shared it on his Instagram account.

He wrote: “A short tribute to @kobebryant. For some reason bigla kong naisip ‘yung tatay ko atsaka si Kiko. Feeling ko mae-excite sila na makaharap si Kobe. I had the same feeling nu’ng mawala si Michael Jackson. May halong ‘what if’ at inggit. Alam ko namang lahat tayo doon din ang punta pero to have people say goodbye so soon seems unfair to some of us. Buti na lang naniniwala akong He has a reason for all of these things. We all deserve to be happy. Right here, right now or in the afterlife. Rest in peace Mamba.”