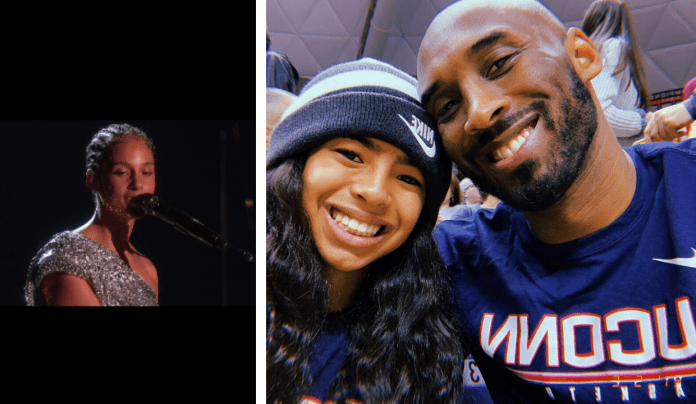 American singer-songwriter Alicia Keys opened the Grammy Awards, the most celebrated event in the music industry, with a heartfelt tribute to the late sports icon Kobe Bryant at the Staples Center.

The famous arena is home to the Los Angeles Lakers, the basketball team Kobe played for in his entire 20-season NBA career.

The NBA legend perished along with his 13-year-old daughter Gianna, and seven other passengers in a helicopter crash early today. Kobe left behind his wife Vanessa and his three daughters — Natalia, Bianka and baby Capri (READ: Basketball legend Kobe Bryan killed in helicopter crash.)

“Here we are together on music’s biggest night celebrating the artists that do it best but to be honest with you, we’re all feeling crazy sad right now because earlier today, Los Angeles, America, and the whole wide world lost a hero,” Alicia opened.

“Kobe and his daughter Gianna and all those that have been tragically lost today are in our spirits and in our hearts and in our prayers,” she added.

The singer then asked everyone at the event to take a moment for those who died in the tragedy.

“I would like to take a moment and just hold them inside you and share our strength and our support with their families,” she said.

Alicia further said that she never would have thought the awards night would start with news of a tragedy. In honor of Kobe and Gigi, Alicia along with R&B and hip hop group Boyz II Men, performed It’s Hard To Say Goodbye To Yesterday.

At the end of the performance, they showed Kobe’s Lakers jersey lit up at the rafters of the arena.