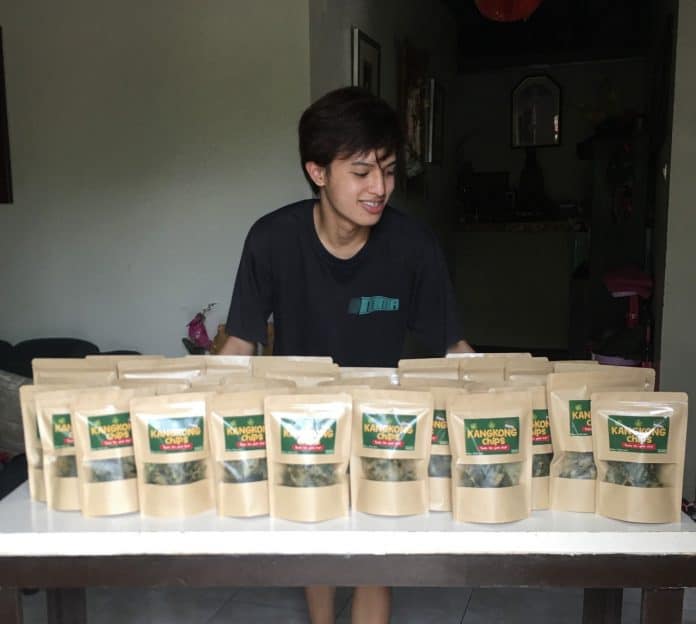 A 17-year-old student from Cavite is now earning P5,000 a day after he started a business venture involving a vegetable that’s quite common among Filipino backyards.

Initially, Josh Mojica’s kangkong chips idea began in May 2021. However, after his grandfather passed away, he eventually decided to push through with his plan in order to help his parents.

After less than a month since he started his business, the young entrepreneur has already made his brand known and now earns P5,000 a day.

This was made possible after presidential aspirant Sen. Panfilo “Ping” Lacson ordered in bulk from Mojica and commended him on social media for his hard work at a young age.

“My office ordered delicious ‘kangkong’ chips as part of our Xmas gift-basket giveaways from this 17-year old entrepreneur from Cavite who started this business to help his parents after his lolo passed away last June. I don’t know him but I’m so proud of him. Hats off!” Lacson tweeted last Nov. along with a photo of Mojica.

Mojica shared that they did not know at first that it was Lacson’s office that ordered 400 bags of kangkong chips, adding that he only realized it when one of the senator’s personnel told him during the delivery.

With an initial investment of around P3,000, Mojica was able to grow his small business. He also found a supplier of kangkong, allowing him to meet the demand for his products.

But due to the influx of orders, Mojica realized that he needed a helping hand in managing his business, prompting him to tap his cousin. But as it turned out, a two-man team was still not enough. And so, Mojica eventually decided to hire his friends.

But just like other business owners, Mojica’s road to success was not easy. When he was just starting, he recalled doing everything alone just to finish his products.

Mojica shared that his business also went through hard times when they were still creating their brand and crafting the recipe.

But with perseverance and determination, they achieved the perfect taste for their crispy kangkong chips.

Mojica, a senior high school student at Saint Augustine School-Mendez, said that he manages his time wisely so he can still study while looking over his business.

Meanwhile, since he is still a minor, his parents and other family members handle the financial side of his business.

Mojica said that he is really thankful for the support of his family members, especially his aunt, who taught him how to make kangkong chips.

His products now reach Baguio and even US and Canada. At present, he has resellers in Cavite and Pasay.

In the future, Mojica plans to build his own kitchen, have pop-up stores in malls and employ more teenagers so that they can help their parents.