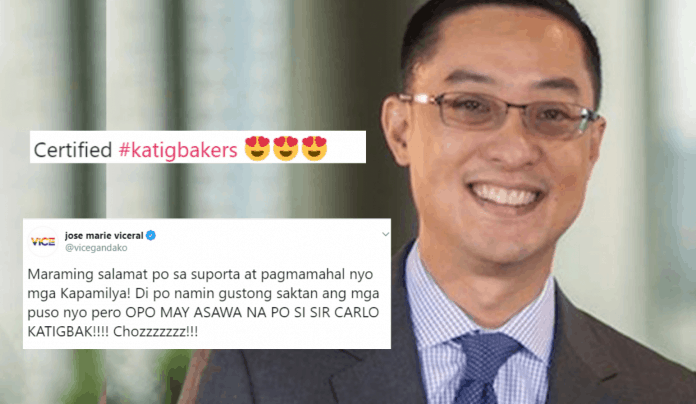 Following the Senate hearing on ABS-CBN’s franchise renewal issue on Monday, Carlo Lopez Katigbak, president and CEO of the media giant, has been dubbed as the new “crush ng bayan”.

The Kapamilya executive recently showed up at the senate to address issues concerning the embattled network, and it appears that he caught the attention of the netizens and viewers.

“Carlo Katigbak” made it to the trending topics on Twitter along with the hashtags #ABSCBNFranchise, #NoToABSCBNShutdown.

The CEO also got himself an instant fans club — the Katigbakers.

Apart from gushing over the 49-year-old CEO’s good looks, the online community is also admiring how he managed to stay calm even under pressure while speaking before government officials at the senate hearing.

“Been getting PM’s and DM’s on how cute Carlo Katigbak and Mark Lopez are LOL. And how calm and respectful they are. Carlo, especially, is trending on Twitter,” freelance journalist Inday Verona said in a tweet.

“He probably never thought that a Senate hearing would turn him to crush ng bayan :),” she added.

Vice Ganda also made an FYI status for the fans of his big boss.

Here are other appreciation posts coming from the “certified Katigbakers”.