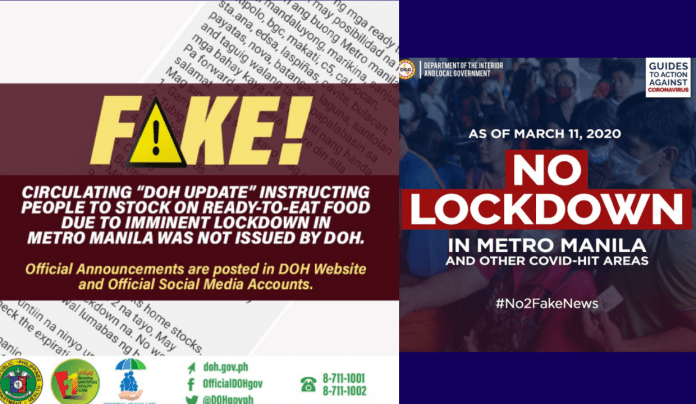 The authorities and news media are addressing a wave of misinformation as fake news has spread like a virus on social media in light of the COVID-19 threat in the country.

Rampant disinformation and coronavirus-related false news have been making rounds online, causing confusion, fear or panic among the public.

Last Monday, March 9, The Philippine STAR released a clarification that “Quezon City only suspended classes in Bagong Lipunan Crame elementary school and high school for March 9, 2020”, after a manipulated screenshot of the tweet regarding a supposed “suspension of classes in all levels in Quezon City” circulated through private group chats.

The fake news warned residents to be cautious as there is supposedly an “outbreak” in the area.

Raffy Tima, on the other hand, cleared that the card used was just a manipulated photo.

“Peke po ito at hindi totoo, mali ang grammar at may maling spelling,” he said in a Facebook post.

Tima also advised the public to be vigilant of what they share online.

United Nations International Children’s Emergency Fund (UNICEF) also warned the public of misinformation about the virus being attributed to the agency. It was even shared by some celebrities supporting UNICEF.

However, the international agency reiterated that they “only post safety tips and updates on our website and official verified accounts”.

ABS-CBN also debunked information that warm weather can prevent the spread of the virus by releasing a statement from the World Health Organization.

“It’s a ‘false hope’ to say that it will just disappear in the summertime…We can’t make that assumption and there is no evidence right now to suggest that that will happen,” WHO executive director of emergencies Mike Ryan stated.

Meanwhile, the Department of Interior and Local Government invalidated an advisory that there is a “lockdown” in Metro Manila and other COVID-hit areas.

The Department of Health on Wednesday also warned the public of a fake content that instructs people to “stock on ready-to-eat food due to alleged imminent lockdown in Metro Manila”.

The local health agency advised people to follow authorized channels for announcements and public advisories instead.

As of Thursday, some 118,000 cases of COVID-19 have been recorded around the world, including 49 in the Philippines, according to the WHO. About 4,200 have died but health institutions have also noted that over 60,000 have already recovered.

Apart from doing precautions such as practice hand hygiene, observe social distancing and avoid non-essential travel, everyone is urged to like and share only accurate and verified information to help stop the spread of COVID-19.

“The fight against rumours and misinformation is a vital part of the battle against this virus,” the WHO said.